Soapie Teasers for Uzalo this August 2022 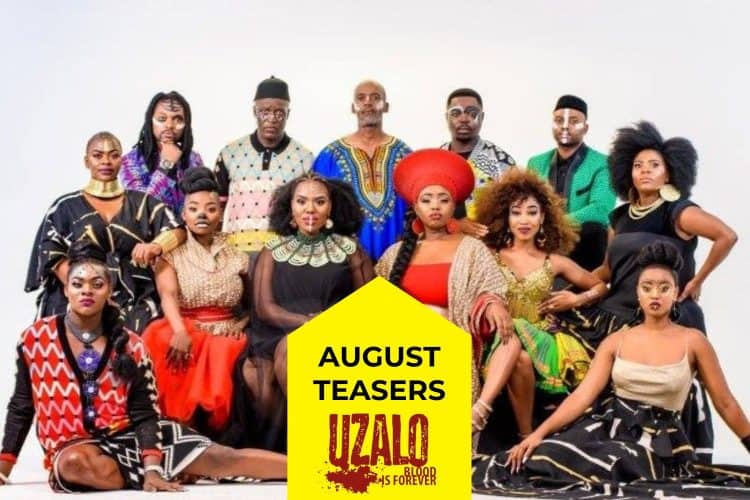 Nomaswazi advises her family to stop paying Putin to lure him out, but will they be able to outsmart Putin?

Nkunzi is left reeling after a discovery of a new enemy in KwaMashu. Mbatha’s prayer for Mamfundisi’s service leaves him frustrated. Nonka hosts a beautiful dinner for her family, where is she going?

Nkunzi gets nowhere with identifying his enemy. Nonka keeps her promise to MaDongwe in an unexpected way. The Magwazas live to see another day.

The Magwaza scrapyard is ransacked by unknown men. Hleziphi’s fears reach a fever pitch and she resigns while Njeza and Sbu are accused of a crime they did not commit.

The Magwaza family prepares for war with Putin. Lilly kicks Hleziphi out of the house. Nkunzi tells Pastor Gwala that Nosipho will always have a grudge against the Mhlongo’s.

The Magwaza’s are knocked for six to learn one of their own betrayed them. Hleziphi is given a stern warning by an ex-lover while Gabisile changes a young man’s life.

Sbu resolves to get the monkey off his back once and for all. Hleziphi and Lilly’s suspicions are raised by Kwanda and Nonka’s behaviour. Mbatha and Pastor Gwala face off on radio.

Sbu achieves his biggest dream to take Nkunzi out for good, has he succeeded? Hleziphi stumbles upon some valuable evidence that threatens to bury Kwanda and Nonka. Mbatha hijacks Gabisile’s interview.

Nkunzi’s life hangs in the balance while Sbu envisions what his future will look like without the Cool Kruger in it. Hleziphi gets abducted.

Nonka gets evidence that Kwanda is indeed a drug dealer. Kwanda tortures Hleziphi to get his drugs back. Nyawo’s shocked hearing that Nkunzi is dead.

The township struggles to come to terms with the death of their landlord. Mbatha goes on a hunt for his mamfundisi. Nonka and Hleziphi take hot seats as they fight for their lives.

The Xaba family learns of devastating news. The hub is in jeopardy of shutting down. Mbatha must adjust to accommodate Tantaswa.

Nomaswazi apologises to Bab’Nsimbi for putting his life in danger. Kwanda is determined to kill Hleziphi if he doesn’t get his drugs back. Sbu is ready to fill Nkunzi’s shoes.

Njeza tortures Khanyisa, but will he give away Kwanda’s location?

Another family’s loss is another family’s gain as the Magwaza’s take the opportunity handed to them. Njeza goes all out for Nonka. Mbatha is faced with moral dilemma on his journey to find ‘Mrs Right’ while Sbu basks in his glory.

Sbu sets his sight on KwaNjomane. The Hub is shut down indefinitely and Mbatha’s search for a mamfundisi continues.

Sbu packs up to leave KwaMashu but will he get away in time? The hub is open for business but it’s a ghost town. The hunt for Kwanda continues.

Njinji tells Nomaswazi why she started sleeping with Bab’ Nsimbi. Lilly threatens to arrest Njeza if he goes after Kwanda. Gabisile receives a backlash on her surprise return show.

Njeza follows Kwanda to his secret hideout but is he putting his life in unnecessary danger?

Nkunzi vows to get strong and go after his enemy. Kwanda refuses to reveal Hleziphi’s location. Nosipho gets an alarming call from Nkunzi.

Follow the daily catch up for Uzalo this August 2022, right here!