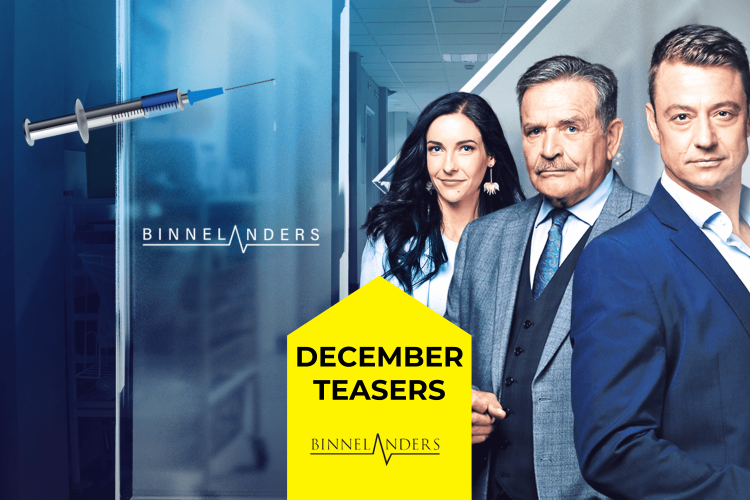 Coming up on Binnelanders this December 2021:

Test results can turn the whole world upside down, while Delia’s honest answer to Rian’s question will send shockwaves throughout the corridors. Ilse is concerned with appointing a manager for Tonik, while Steve faces a new test – and he needs Janneke’s assistance.

Rian struggles to hide his deepest emotions, while Tracy’s night turns into a fiasco.

Ilse ponders on the meaning of Tonik, and Delia unknowingly encourages Rian to investigate the darkest corners of his heart. Naomi takes her bad mood out on everyone, while Tertius’s words hits Tracy hard.

Delia goes behind the curtain on her biggest secret, and Gaby informs Uys that he is interfering in Steve’s life. There is something seriously wrong with Janneke and Naomi’s patient…

Chanel sees something that she shouldn’t. A confession is greeted with built-up emotions, and Louis has a solution for Ilse’s problem.

Gaby might be defending the wrong person in a crisis, while water damage gets everyone’s attention. Delia is not at all happy with what she comes to hear.

Delia’s biggest fear is expressed in a threat. Vicky’s request catches Steve completely by surprise, and Rian forgets to guard his tongue. An email causes tension, while Tracy has already caught the Christmas spirit. ‘To kiss or not to kiss’ is almost as big of a debate as the factors that lead to a relationship.

Janneke opens up her heart to Naomi – but it is not the worst part of her day. Wimpie and Ilse take Tracy under their wings, while Annelize doesn’t hold back in a conversation. Tracy pleads with a very unsure Delia, and Steve words the doubt in his heart. A friendship and a relationship might not be able to co-exist.

Dr Butler needs to speak to Delia urgently, and Uys pleads his innocence. Conrad has devised a plan to sweep his love off her feet. Janneke’s version of the previous day’s incident is questioned. Tracy has a brilliant idea for Tonik, and Delia is not in the mood to forgive and forget so easily.

Work responsibilities could derail big plans. Naomi is not the only one keeping an eye on Janneke. Louis is very concerned about his health. Tracy hears about Conrad’s other embryo for the first time, while it is not just Delia’s life that changes in the blink of an eye.

Annelize needs to decide whether she is going to share her strong suspicions, and Danny tells Steve about Elise’s secret weapon. Rian tries to lead Conrad to new insights, while Danny’s question stresses Janneke out.

A distasteful incident is discussed, while it becomes clear that Delia at least has one confidant left. Janneke informs Tertius about her decision, and Vicky meets Father Christmas.

Delia causes tension between two old friends, and an invitation could mean something more. Louis needs to make a decision regarding his silence, while Chanel is too cunning for a sly trap. Conrad is uncertain what At knows, and Danny remembers something important. Steve observes something very peculiar.

At gives Naomi a reality check, while Elise is in trouble about Maria. Steve’s acting skills are put to the test, while Delia still can’t be found. Vicky spends more time with Father Christmas, and Steve’s investigation leads Danny to start one of his own. Rian’s continued efforts might lead to a breakthrough.

Vicky’s locket is missing, while Danny devises a plan to ensure Maria takes a bow. Steve needs to make a very difficult decision, and Naomi is concerned about her future. Wimpie gives Janneke a mouthful concerning his treatment, and At pushes Annelize to play both mediator and spy.

Steve plays open cards with Danny, while Janneke becomes an enormous headache for Binneland Clinic. Elise will have to think fast to solve her latest crisis. Tracy asks Louis about Tonik’s social media, while At follows a few routes to be able to monitor Louis’s movements.

Janneke becomes a topic of discussion, while Rian shouldn’t expect a christmas gift from At. Vicky complains about the concert to Father Christmas – and he tries to encourage her. Naomi can no longer keep her guilty conscience quiet, while Steve can’t hide his.

Annelize and Tertius’s work is cut out for them, and an apology might prevent a cold shoulder. Vicky wants to find out more about Father Christmas’ family, while Elise and Annelize has a misunderstanding regarding the press.

Conrad realises what Delia has done to Rian. Annelize doesn’t hold back in a conversation with At, while At still follows his own head. Steve and Janneke meet face to face.

Steve has a big task at hand when Vicky starts asking questions about Charlotte, and Naomi is just waiting for the bloodtest results before sharing news with Louis. Conrad summons Steve to his office, while pressure is mounting on Louis to appoint a new manager at Tonik.

Vicky asks Elise’s help with Father Christmas, and Danny asks Gaby and Karen for a favor.

The harassment calls don’t stop, while Louis and Naomi gets a big surprise. Steve is concerned about Lexi and Ruan’s interactions with the same stranger. Ilse’s hopelessness leads to a decision regarding Tonik. Father Christmas comes to hear of Tertius and Annelize’s problems with a patient.

A couple discusses their dreams for the future. Joline’s excitement is not contagious. Tracy and Annelize both receive very good news, while Louis’s emotional words cut deep. Annelize gives Steve a very strange message, and Ilse informs Conrad about a decision.

Follow the daily catch up for Binnelanders this November right here!