Trevor Noah called a “hypocrite” for consoling Will Smith after Oscars

Critiques are calling out Trevor Noah for his comments on Kanye West's harassment but now stands with Will Smith after the Chris Rock slap. 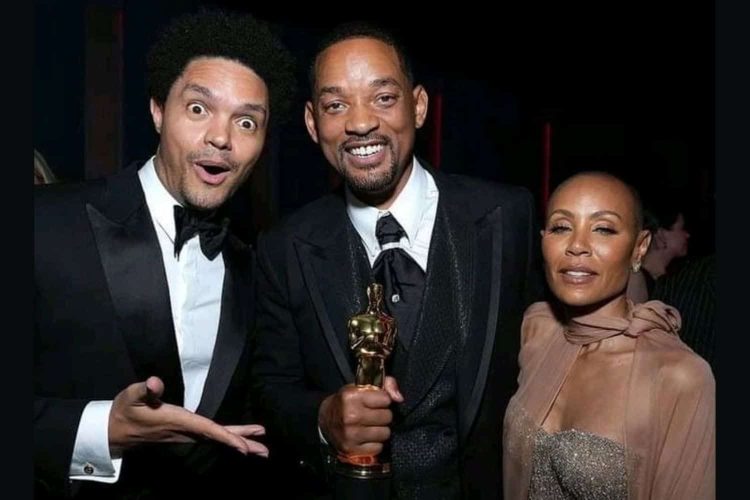 After the incident between Will Smith and Chris Rock at Sunday night’s Oscars, all the celebs got together for the Vanity Fair after-party. And here, Trevor Noah was seen speaking to Smith – and getting criticised for it.

Noah was in the audience and witnessed the slap live and even tweeted his shocked reaction.

While at the party, it was reported that The Daily Show host had a long conversation with the King Richard actor.

And according to TMZ reports, there were many photos going around of a still-emotional Smith arriving at the party when Noah came up to him and shared some words.

Afterwards, the two hugged it out and took some photos together.

However, this interaction didn’t sit well with everyone since Noah recently openly criticised Kanye West for the harassment of Kim Kardashian.

And almost instantly, Noah was being criticised and labelled as a “hypocrite” for showing support for Smith and not West – who has publicly struggled with his mental health.

“But Jada has alopecia, it was poor taste”

Kanye has bipolar but he was fair game for Trevor Noah and friends. pic.twitter.com/XzF1LnE549

Will Smith apologises to Chris Rock

Even though Smith apologised to everyone except Chris Rock in his Oscar acceptance speech, he eventually addressed the incident on Tuesday morning.

“I would like to publicly apologise to you, Chris. I was out of line and I was wrong.” I am embarrassed and my actions were not indicative of the man I want to be.”