What is happening in Binnelanders this October: See the Soapie Teasers here 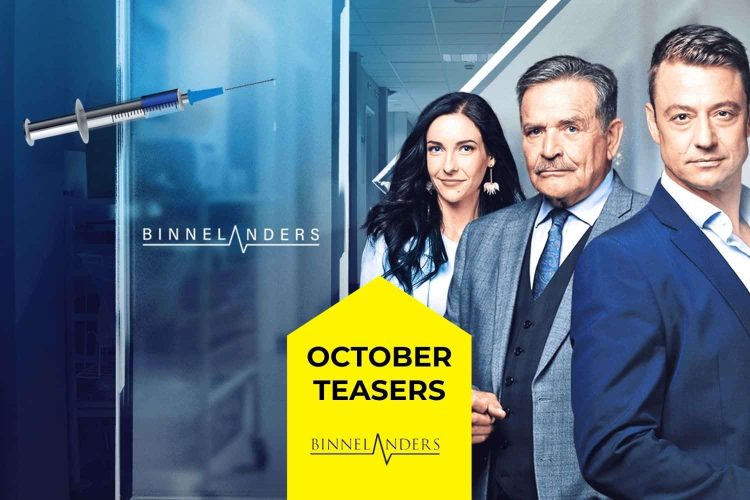 Coming up on Binnelanders this October 2021:

Tertius is livid when he finds a certain doctor in Binneland Clinic, and Chanel is not alone in the dark. Liam admits something to Uys, while Max tells Danny more about Roelf. While Gaby’s love life is not getting on track, she encourages Karen to speak her heart’s truth.

This week on Binnelanders:

Elise confronts Tertius about his true feelings, while Chanel forms a plan to escape. The wind is taken out of Karen and Gaby’s sails, and Conrad enlists Piet’s help for information. Annelize’s date ends in a bedroom.

Katey and Chanel try to work out who Roelf really is, and Steve gives Annelize more than enough to think about. Conrad is not the only one that thinks Brandon and Danny’s plans are dangerous. Tracy realises where the love birds are having problems, while Gaby knows what is wrong with Tertius.

Annelize welcomes Xander back to Binneland Clinic. It quickly becomes clear that Uys needs advice when it comes to the fairer sex, while Danny gets his plans in order before Roelf’s call. Elise is forced to adjust her plans, while Chanel and Katey’s future isn’t looking too bright.

A bride in ER sets the nurses’s tongues – and imaginations – free, while Louis shares news regarding Chanel with Naomi. Tracy doesn’t give up as easily as Uys, and Tertius’s feelings are on the tip of his tongue. Chanel’s future hangs in the balance.

This week on Binnelanders this October:

Elise tries to determine what is fact and what is fiction, and Brandon’s emotions catch Karen off guard. Noami tries to silence Binneland Stereo, while Uys tries to manage his future by asking his past for answers. Time is running out for Chanel and Katey.

A big question flows freely from liberated lips. Elise thinks it is her duty to ensure that Annelize ends up with the right man, while there is no stopping Binneland Stereo. Uys doesn’t get the answers he is looking for, while Danny gets it from all sides.

Xander confronts Elise, but motivates her ever more in the process. Honesty shocks Brandon and Annelize, while Uys reveals another side of himself. Gaby decides that there is only one way to end things, while Danny and Tertius arrive at the same conclusion. Brandon puts all his cards on the table.

A conversation with Uys cheers Tracy up, and Elise just can’t let go of her plan. Annelize discusses matters of the heart with more than one person, while Chanel tries to prepare Danny on the arrival of Martin.

A call causes trouble for Danny – and strenghtens Brandon’s big idea. Elise will have to think on her feet to execute her plan, while Conrad’s words bother Tracy.

This week on Binnelanders:

Vida contacts her family, and Tertius discusses Annelize with Gaby. Chanel is caught off guard with news that Martin shares, while Annelize isn’t looking forward to the task at hand. Conrad does things that upset Tracy, and Danny is being watched…

A dinner invites causes conflict, while Conrad asks Tracy a huge favor. Annetjie hears something that she shouldn’t – and can’t keep it to herself. There is no concensus on an agenda point of the board meeting. Annelize confronts Xander regarding his ambition, and Jenna makes contact with Danny.

The nurses’s night out is spoiled with the presence of ‘the enemy’. Danny and Chanel hide things from each other, and Nadine wants to make Danny part of her team. Elise tries to motivate Tertius to go into action, while Tracy upsets Annetjie a lot.

Annelize unmasks Xander to Steve and Conrad, while Naomi realises Tracy is in the dark regarding the circumstances of the previous night – and Gaby thinks they should get her to help them. Nadine knows what she wants – and how to get it! Frustration leads to a vulnerable conversation.

Danny gets his first task, and Gaby bombards Tertius with questions. Boeta is urgently looking for Naomi, but she doesn’t realise the seriousness of it. Tracy feels redundent, while Jenna discusses Danny with her superior.

This week on Binnelanders this October:

Danny needs to think on his feet when Tertius sees something he shouldn’t, and Trudie is not as calm with her situation as she pretends to be. Conrad and At consider strategies to make more money, while Tertius’s gift raises eyebrows. Lexi meets Martin, while Jenna has plans of her own regarding Danny.

Tracy gets advice on her big project, and Annelize shares more than is necessary with Annetjie. Martin’s conversation gives Brandon hope for the future, and Trudie is fiery when she vanquishes Naomi’s suspicions. Nadine reminds Danny who the boss is, while Renate struggles to believe her daughter’s story.

After the conversation with Trudie the previous night, there are more questions than answers. Tracy doesn’t just ask Annelize’s advice – she also offers her help. Tertius talks out of turn in front of Chanel, and Naomi is shocked in what Renate has found out.

Danny’s choice angers Nadine, while there is a very uncomfortable situation in Amoret.

The wedge between Danny and Chanel is driven deeper. At gives Conrad advice on Tracy – while both worry about how the board will vote. Lexi gets an unexpected compliment, and Trudie makes a secret appointment. Martin sees a snake in the grass where Danny is concerned.

Chanel’s discovery leads to a rollercoaster of emotions, while Jenna tries to rectify a situation. Renate is not happy with Trudie’s new idea, while Steve and Conrad are not sitting around the same fire. Martin has advice for Danny concerning Chanel.

Follow the daily catch up for Binnelanders this October right here!