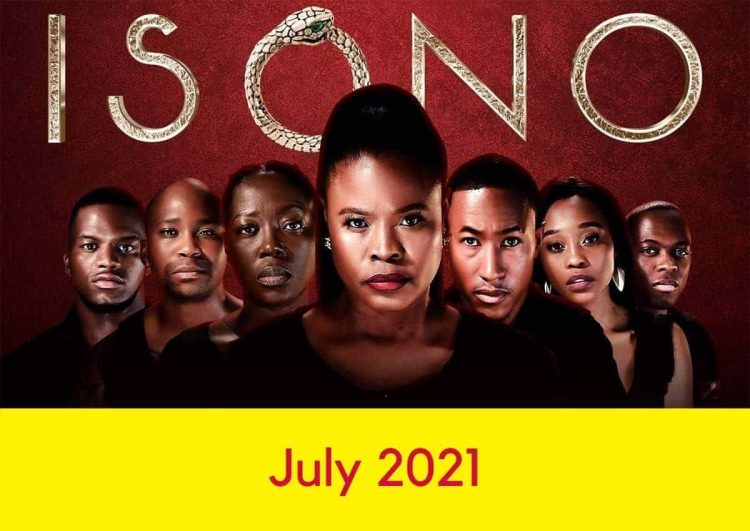 This week on Isono this July:

Gabriel invites trouble into HOG. Esther’s career spirals out of control and Fentse finds some answers to her past.

Rubin, Esther, Abednego and Zakwe hit a collision of interests at CasaNova, while Gabriel has to deal with Gombwa, who has come down with a mysterious illness!

Gabriel’s dealings with Gombwa get even more serious whilst Mary calls AB in for an important meeting. Makwande sets a trap and Fentse finds out some key information about Mary.

Esther is on a mission to open Casanova again but this gets in the way of Abednego’s plans.  At HOG, Fentse is set on ending the search for her mother.

This week on Isono this July:

Gabriel tries to get Makwande to keep Mary’s secret. Phindile and Umpas do their own investigations into Fentse’s past. Mary finds out that Rubin might still be around.

Abednego decides to choose a different path. Meanwhile, Gabriel is left to grapple with the loss of his childhood love while still dealing with Gombwa and Makwande. Umpas and Phindile have a breakthrough in Fentse’s mysterious family situation.

While Rubin works hard to cause as many problems for Esther as he solves, a mysterious man arrives in town looking for her. Meanwhile, Gabriel tracks down the man who can cure Gombwa. And Fentse finally reunites with her family, leaving her with an impossible choice.

Mary learns that Rubin is working at Esther’s club. Zakwe hears the song that Lesedi wrote about him. Umpas finally finds the courage to ask his crush to the matric dance.

Mary tasks Gabriel with taking care of Rubin, while Elliot decides to introduce himself to his daughter. Maradona has a job offer for Zakwe.

Mary gets invited to Esther’s big club opening; not knowing that both dads will be in attendance.

All the World’s a Stage

Mary and Elliot see one another for the first time in over 20 years. A love-sick Zakwe is willing to do anything to go to the dance with Lesedi.

Esther’s success is over shadowed by a shocking and devastating truth. Phindile’s hopes for the perfect matric dance are crushed. Mary seeks help from an unlikely source.

Zakwe is getting sucked deep into Maradona’s world. Phindile is all over social media as a needy orphan, thanks to Millicent.

Elliot and Mary move closer to getting Rubin, but when Sarah discovers that Rubin has intentions of spilling to the cops, she sets out to deal with him herself. A guilt-ridden Zakwe finds out the repercussions of their robbery the night before.

How Many Secrets are there?

Gabriel reveals a well kept secret to Esther, forcing Mary to spin a story for Esther. Meanwhile Phindile struggles with the pressure of the dance and finding the right dress and Maradona plots against Noluthando.

Mary and Siviwe have a disagreement about her past. Sarah pays a visit to Gazati. Zakwe agrees to help Maradona on his last mission to rob Noluthando.

Don’t miss out on the drama of this month’s episodes of Generations right here.