[WATCH]: Will Smith slaps Chris Rock at the Oscars

After slapping Chris Rock for a joke about his wife, Will Smith won his first-ever Oscar for his role in King Richard. 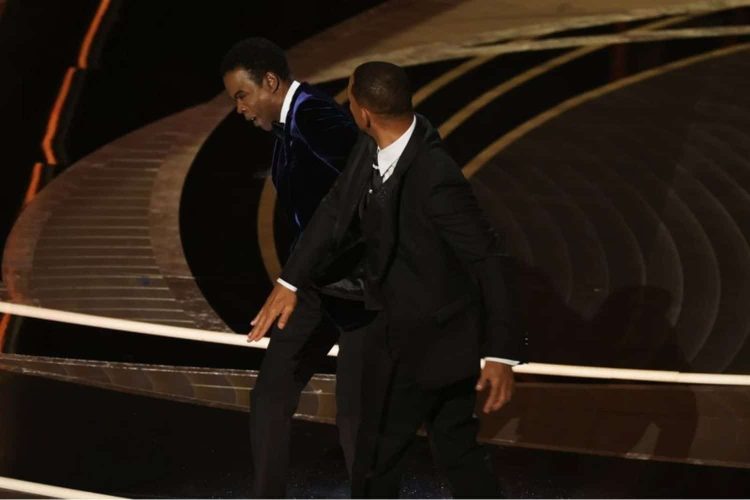 Twenty years after his first nomination, Will Smith finally won his first Oscar. However, the incredible win was overshadowed by the fact that just moments before, Smith slapped Chris Rock on stage in front of the whole audience and live TV at the 2022 Oscars.

During his time as a presenter at the Oscars, comedian Chris Rock made a few jokes about fellow celebrities in the audience. And he ended his monologue with a joke about how he is looking forward to seeing Smith’s wife, Jada Pinkett Smith, in the next G.I Jane film.

The joke did clearly not sit well with the Smiths since Jada has been open about her alopecia – a condition that causes severe hair loss – since 2018.

And just when Rock was ready to move on with his monologue, Smith walks up the stage and slaps him – hard.

And as if that wasn’t awkward enough, the actor then proceeds to yell at Rock to “keep my wife’s name out of your f***ing mouth.”

After the confrontation, Smith was seen speaking to Denzel Washington, Bradley Cooper and Tyler Perry.

And as the actor was confiding in them, Denzel Washington told him, “At your highest moment, that’s when the devil comes for you.”

Will Smith gets emotional during his acceptance speech

Just moments after the incident, Smith won his first Oscar award for his role as Richard Williams in King Richard – the father of Venus and Serena Williams.

During his acceptance speech, the actor got emotional and had tears streaming down his face.

Smith also thanked the Williams family for “entrusting me with your story”. He then jokingly added: “Art imitates life,” he said. “I look like the crazy father, just like they said about Richard Williams. But love will make you do crazy things.”

Smith apologised to the Academy and his fellow nominees but not to Chris Rock. And it seems like the slap might have been a long time coming with many emotions being built up from Smith’s side.