Will Smith banned from Oscars for 10 years – he responds

Will Smith responds with just one sentence after the Academy bans him from the Oscars after his surprise slap overshadowed the entire event. 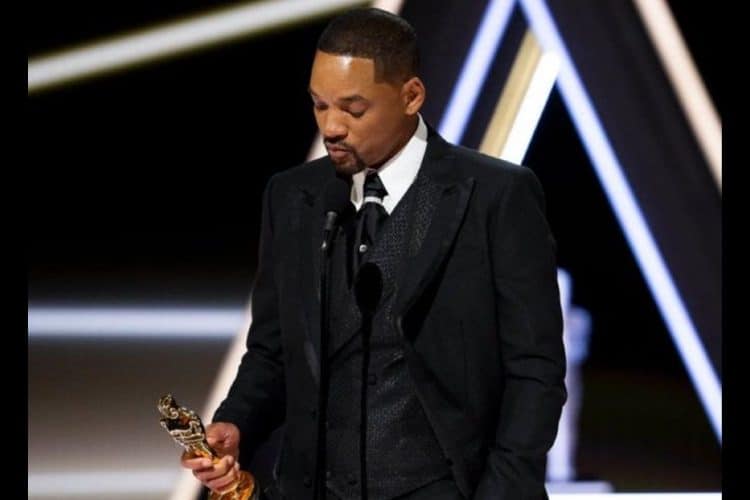 After the Academy of Motion Picture Arts and Sciences governors met on Friday 9 April, they have come to the decision to ban Will Smith from attending the Oscars for 10 years.

This decision was made after the actor slapped Chris Rock on stage at the 2022 Oscars on 27 March for making a joke about his wife, Jada Pinkett Smith. And not only an hour after the incident, Smith won his first-ever Oscar for his performance in King Richard.

The slap overshadowed all other celebrations at the 2022 Oscars

Since the incident, Smith has apologised to the Academy and Rock and has also resigned from the Academy. So because the Academy could not suspend or expel him, they had to “punish” his display of violence.

And so the board announced their decision in an open letter that the actor was not to attend the Oscars for a decade.

“The Board has decided, for a period of 10 years from April 8, 2022, Mr Smith shall not be permitted to attend any Academy events or programs, in person or virtually, including but not limited to the Academy Awards.”

The board continued by stating that the Oscars were meant as a celebration of those in the industry who have done “incredible work”. However, all of these achievements have been overshadowed by Smith slapping Rock.

“The 94th Oscars were meant to be a celebration of the many individuals in our community who did incredible work this past year.

“However, those moments were overshadowed by the unacceptable and harmful behaviour we saw Mr Smith exhibit on stage.”

Will Smith responds with a one-liner statement

In response to the Academy’s decision, Smith simply responded with one sentence in a statement.

“I accept and respect the Academy’s decision.”

This ruling now means that Smith will not be announcing the winner in the Best Actress category at next year’s Oscars – a tradition that has been continued for years.

Furthermore, the Academy ended their letter by thanking Chris Rock for keeping it together during the surprise incident. And the Academy believes that his action against Smith is the right thing to do in order to keep everyone safe.

We want to express our deep gratitude to Mr Rock for maintaining his composure under extraordinary circumstances. We also want to thank our hosts, nominees, presenters and winners for their poise and grace during our telecast.

This action we are taking today in response to Will Smith’s behaviour is a step toward a larger goal of protecting the safety of our performers and guests and restoring trust in the Academy. We also hope this can begin a time of healing and restoration for all involved and impacted.