The 12th of December 2021 is National Poinsettia Day, a beautiful plant widely recognized as the Christmas flower. 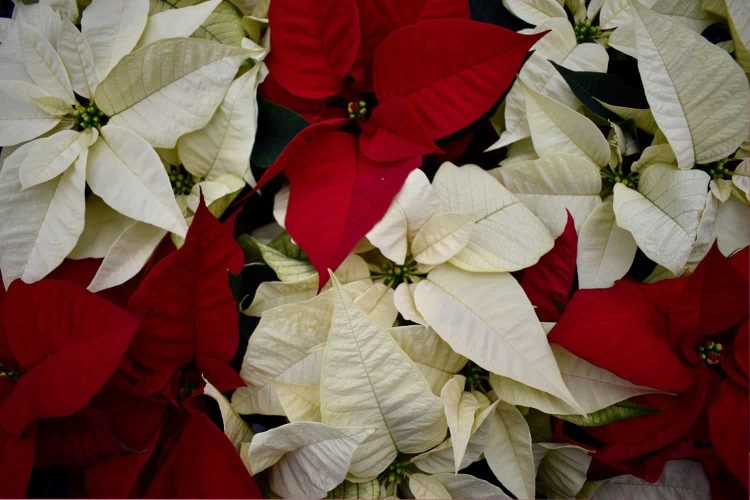 Poinsettia Day 2021: The Christmas Flower. Photo by kstankss from Pexels

On December 12th, 2021 we celebrate the Poinsettia, a beautiful plant whose red and white flowers combined with deep green foliage earned it the name of Christmas flower. Known as “Flor de Nochebuena” in its country of origin, this festive plant makes for great Christmas decorations. And is in fact not the poisonous plant that many believe it to be.

What Type of Plant is Poinsettia

The Euphorbia pulcherrima, or Poinsettia, is a shrub indigenous to Mexico and Central America. It is part of the Euphorbiaceae family, also known as the spurge family.

This small tree grows to heights of between 0.6 and 4 meters. Its “petals” are actually part of its leaves and are usually a stunning rich red colour. Although botanists have cultivated it to show a variety of colours such as white, pink, pale green or even orange. These leaves, referred to as bracts, are typically seven to 16 centimeters in length.

Many people across the world recognize Poinsettia as a highly toxic plant, capable of killing a small child or animal. However, this is a misconception.

It first started with an urban legend from 1919 in which a two-year-old child supposedly died after consuming one of the leaves from this Christmas flower. The US Food and Drug Administration then exacerbated the belief in 1970 when they stated “one poinsettia leaf can kill a child”. I suppose it is understandable that they would rather be safe than sorry!

Now in 2021, we know that this Christmas Flower is not as dangerous as previously believed. Since the 1980s many studies have been done. In one of these, the American Association of Poison Control Centers performed a survey of over 20 000 cases. They found no fatalities. 92.4% of cases of exposure had no effect and 3.4% showed minor effects that were “minimally bothersome”. In some cases, patients have experienced mild asthma and in others, exposure resulted in some redness and itchiness of the skin. Similar to many other plants.

Poinsettia originates in Central America. Its range covers approximately 2000km, extending from Mexico to southern Guatemala. Although their natural habitats are shrinking, mostly due to deforestation.

The Aztecs were the first to cultivate poinsettias. Using it for both a red dye as well as to use as an antipyretic medication.

Then in the 1820s Joel Roberts Poinsett, the first United States Minister to Mexico, introduced the plant to the United States. At which point the Euphorbia pulcherrima was given its common English name, Poinsettia. From here on it became widely cultivated.

How to Care for Your Poinsettia

Interestingly enough these plants are quite fussy. While in full bloom they require lots of bright, but indirect, light. As well as plenty of moisture and a semi-cool, humid environment. However, it is also important that they have the correct amount of drainage. For while they like a wet environment, they do not want to be overwatered. Furthermore, sitting in water for too long could easily result in problems such as root rot.

Then, once the bracts have fallen from the plant, it is traditionally discarded. Although, should you wish to hang on to it for the following year, watering should be drastically decreased. Giving it enough just not too dry out completely. And it will want to be relocated to a cool and dark space. The new bracts are created through a process called photoperiodism. This means they will want at least 14 hours of darkness at a time for approximately 6 to 8 weeks.