Look: The James Webb Telescope captures the Pillars of Creation

In new images shared by NASA, the James Webb Telescope gives us a closer look at the forming stars in the Pillars of Creation. 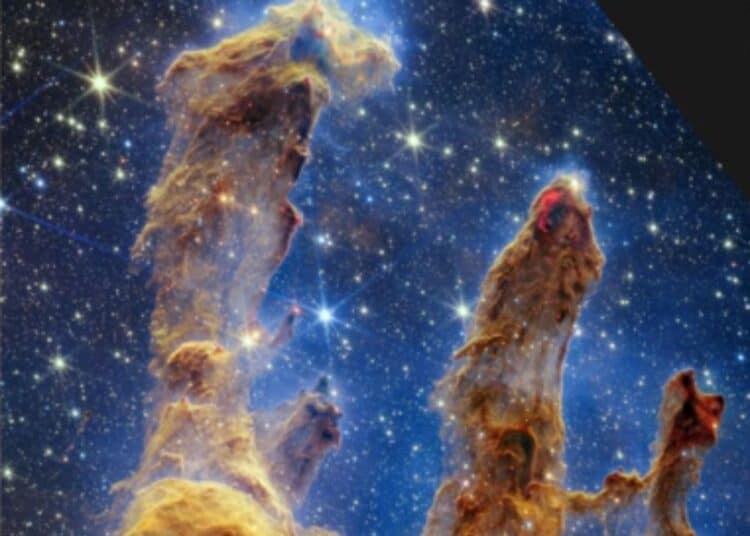 The first new Image of the Pillar of Creation has been shared by NASA. Photo: NASA

The Pillars of Creation were last captured by the Hubble telescope in 2014. Its first view of it took place in the 1990s.

Presently, the James Webb Telescope launched in December of 2021 and cost at least $10 million dollars to create. Since then, NASA has been able to take pictures of things that could once not be seen in the Galaxy.

Right now, the Pillars of Creation is a star-forming region that was previously captured by the Hubble telescope. However, the details that have emerged recently were not detected in previous images.

To date, the Pillars of Creation in the images look a lot like smoke. But NASA describes this as a gas that is speckled with stars around it.

The statement by NASA reads, “When knots with sufficient mass form within the pillars of gas and dust, they begin to collapse under their own gravity, slowly heat up, and eventually form new stars.”

Thus far, the James Webb Telescope has the ability to zoom in on things in the galaxy which is at least thousands of lightyears away. As of late, the telescope has taken pictures of Mars, Jupiter, and Neptune.

About the Pillars of Creation

So far, the James Webb Telescope has been able to give a deeper insight into what’s going on in the galaxy, in order to understand more of what is going on around us and how it can affect planet earth.

Now, the Pillars of Creation had gotten its name in the past due to the forming of infant stars within gas that ultimately looks like a cloud. In a previous statement, NASA explained the particulars of the area.

“Along the edges of the pillars are wavy lines that look like lava. These are ejections from stars that are still forming. Young stars periodically shoot out jets that can interact within clouds of material, like these thick pillars of gas and dust,”

Do you have Crypto? Here’s what to expect in SA