Why Healthy Bacon is the Way To Go

Bacon is considered a less than healthy option, but only because of all the unnecessary additives and methods used to make it. 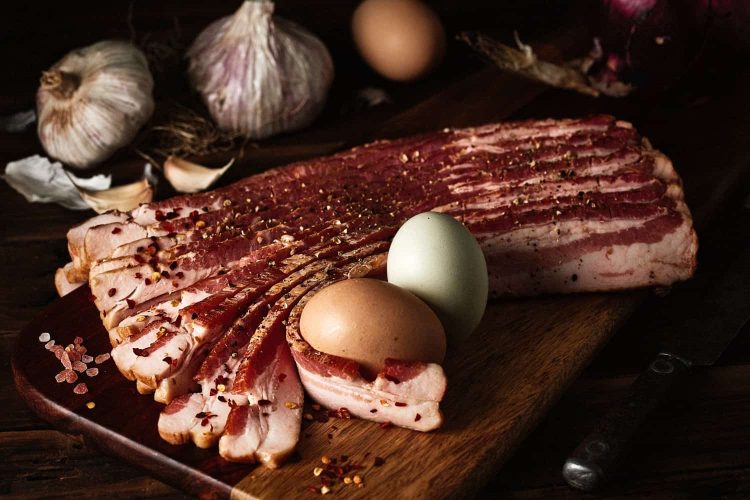 Why Healthy Bacon is the Way To Go. Photo by James Kern on Unsplash.

There are very few carnivores on this planet that don’t love the salty burst of flavour that comes with a bite of crispy bacon. But have you ever checked the ingredients list on the average packet of bacon sold in stores? I’m not one to run around insisting we all read the labels of every product before we put it in the trolley. However, I was shocked when one day I perused a packet of bacon as I was frying it. Bacon would be sorely missed if taken off the menu. So the first thing I did was research healthy bacon options. Surely that delicious aroma and taste are not purely from the additives!

Why The Average Bacon is Unhealthy

To my dismay, as I researched healthier bacon options, I ended up coming across more reasons why your average bacon is a bad idea.

First off, let’s tackle the original cause of my concern. The ingredients list. This is just some of the contents listed on the particular packet I had in my hands on that fateful day:

How did we get to this point? Bacon is essentially pork belly. Something that many people consider simply delicious just as is. Why did anyone feel the need to put so much “stuff” in it? Obviously, this was just the packet I had in my hands at the time and not all brands will have the same ingredients. But when it comes to the average shop-bought brands, I doubt one is any better than the next.

Further reading led me to the curing processes used. Most bacon manufactures use nitrates and nitrites as curing agents and preservatives. These nitrates are what give processed meat that characteristic pink colour and are also said to play a role in flavour enhancing. But delicious or not, throughout the curing, digestion and cooking processes, these chemicals form carcinogenic compounds called nitrosamines that ultimately damage DNA and are considered cancerous to humans. Making our everyday bacon a considerably less than healthy option.

In 2015, this was made official by the International Agency for Research on Cancer (IARC) who reclassified processed meats as a Group I carcinogen. And WHO (the World Health Organisation) also puts processed meat, like bacon, when cured with nitrites, in the same category as asbestos and smoking.

Now, don’t take this as a rant against nitrates and nitrites in general. All chemicals have their place in the world. And in fact, many of the vegetables we regularly eat contain nitrates. Some of which contribute to nitric oxide formation in the body, which is actually a good thing. So, while we should still monitor our intake, when not messed about with by the human hand, these chemicals are not always bad. It gets complicated, but without having to explain complex chemical reactions that even I don’t understand 100%, the bottom line is that while the nitrates found in ham can be chemically identical to those in a salad, it’s the vegetable-based ones you should rather eat.

And to add to this point, it’s not just the nitrates, or the MSG, or the sugars. It’s the sum of it all put together to make a cocktail that will harm your body and mind. That, plus whatever other toxins you absorbed during the same day.

What Alternative is There?

Ideally, bacon should not contain any sugar, nitrates, nitrites, chemical solutions, celery, phosphates or water. Something that is achievable if produced using traditional drying and smoking methods. So my first recommendation, as usual, is to try to make it yourself. Most butchers should be able to sell you sliced pork belly. Then you can either try smoking it, rub it in spices, or both. Also, remember to add a fair sprinkling of salt.

Otherwise, there are a few South African based farmers that produce and sell traditionally made bacon. Simply search for nitrate-free meat online and you should find one. However, these companies have different methods of curing and smoking meat. The main focus being avoiding nitrates and nitrites in an attempt to make non-carcinogenic bacon. So be sure to ask about ingredients before assuming that nitrate-free means pure and organic.