GR Cup heads to Zwartkops for final round

The final round of the TGRSA cup at Zwatkops raceway near Tshwane feauring the Toyoto GR Yaris, is upon this weekend. 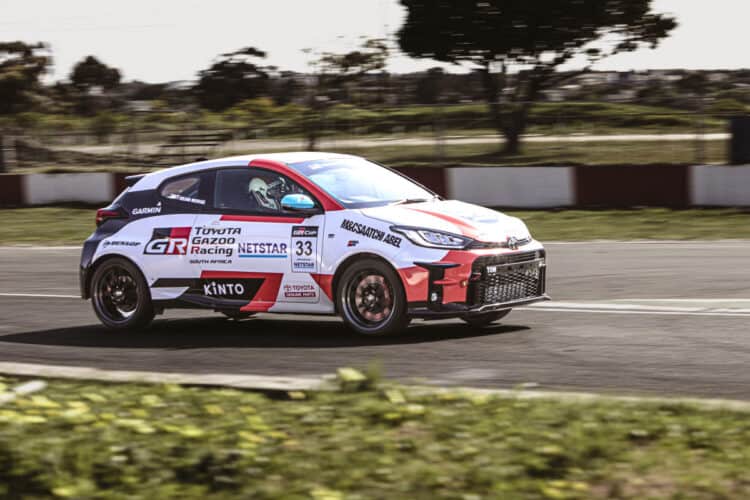 TOYOTA GAZOO Racing SA’s popular GR Cup is heading to the Zwartkops Raceway near Tshwane, Gauteng, for its final round this weekend. The Cup, which sees six of South Africa’s foremost motoring writers battle it out on track, uses Toyota’s exciting GR Yaris in production form, with only the required safety equipment added.

Cars.co.za’s Ashley Oldfield amassed enough points during opening six rounds of the Cup to secure the inaugural title, and will be sitting out the final round as he competes in one of TGRSA’s Global Touring Cars (GTC) for the weekend.

Despite the newly minted champion missing the race, the on-track action is expected to be fierce this weekend. Thomas Falkiner, runner-up in the Cup, holds a 16-point advantage going into the final round. With only 14 points on offer, split between two race heats netting seven points each, his position is secure.

However, Sean Nurse who is currently in third place in the standings, finds himself only six points clear of Mark Jones, so he will have to be on top of his game in order to ensure that he holds onto the final podium position in the overall standings.

Further back, Jeanette Kok-Kritzinger and Lerato Matebese have been trading blows all season, though the former missed out on Round 5 in East London due to illness. Matabese, for his part, was unable to start in two of the races – one at the Aldo Scribante Racetrack, and the other at Redstar Raceway.

The season has also seen a variety of guest drivers take part, starting with racing legend Deon Joubert, who stood in for Sean Nurse during the opening round, as Nurse attended his brother’s wedding. Other guests included Toyota South Africa Motors’ (TSAM) Peranand Pather, John Thomson and Riaan Esterhuysen, while Imperial Toyota’s Mario de Sousa got a turn at Gqeberha for Round 3.

President and CEO of TSAM, Andrew Kirby, will don a race suit and helmet for the final round, driving Oldfield’s GR Yaris at Zwartkops.