EFF calls for the removal of France from the African continent

EFF leader Julius Malema has called for the removal of France and the French lang.uage from the African continent 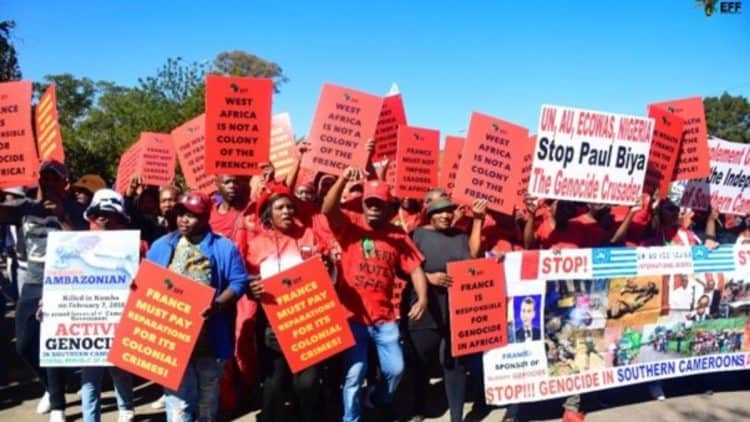 The Commander in Chief of the Economic Freedom Fighters (EFF), Julius Sello Malema, together with the leadership of the EFF, led a March to the French Embessy on Wednesday in Pretoria, calling for the removal of France from the African continent.

EFF members gathered in numbers and waited for their leader Julius Malema to arrive and lead them in their march to the French Embassy to hand over their list of demands.

The was a delay in starting the official programme of the picket because there was nobody from the embassy available to receive the memorandum. “We are not going anywhere until someone comes to receive our memorandum,” said Malema.

The EFF march coincided with Africa Day celebrations on 25 May. Malema told his supporters that the removal of the French language would help enhance African identity. “France must grant full independence to all African countries and allow them to determine their own currencies, monetary policies, and economic direction. France must stop all colonial taxes.”

Malema called for the withdrawal of the French troops in Africa, accusing them of being behind the military coups in West Africa.

“France must immediately remove all its military bases which are currently stationed in Africa. This includes but is not limited to military bases, French soldiers, French aid through arms, and any presence of French influence in the armies or militia groups in Africa. France must return all mineral or fiscal reserves held by the French Treasury to African nations and any of their former colonie,” said Malema.

Aurelein Lechevallier, the Ambassaor of France received the memorandum but said they disagree with the EFF. “We respect the EFF as a political movement. We will convey the memorandum to Paris but we have our disagreement. Today France is a partner with Africa and we are friends of the African nation.”