Families such as the Mapapas have been surviving on the special Covid-19 grant, which has come to an end. How they will survive moving forward is a question many in South Africa now face. 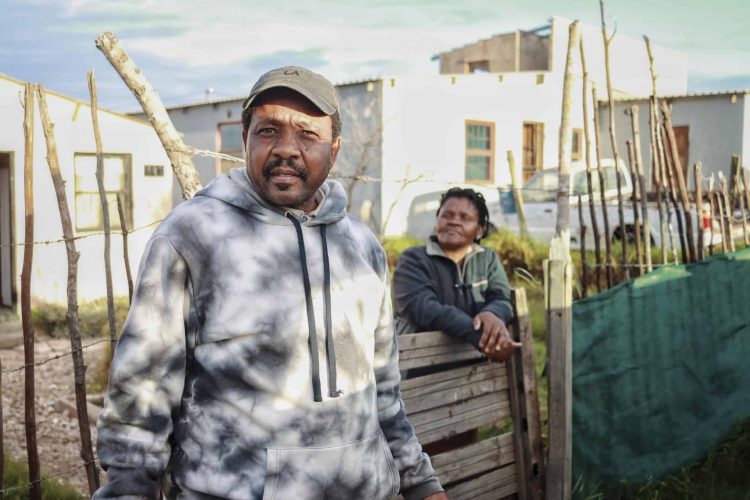 29 April 2021: From left, Petros Mapapa and his wife Boniwe Gloria Mapapa. The family relies heavily on the special Covid-19 grant to survive. (Photographs by Chris Wilson)

Aseries of financial blows during the coronavirus pandemic has left one Southern Cape family in dire straits, barely surviving on social grants.

The Mapapa family of five from Thembalethu, George, in the Western Cape lost their main source of income when mother Boniwe Gloria Mapapa, 52, was retrenched during the Covid-19 lockdown.

This includes the Covid-19 social relief of distress grant of R350 per month, which ended on 30 April, leaving families like the Mapapas sure that they will not be able to put enough food on the table to feed the family.

Mapapa described how she was retrenched during lockdown from the company where she had worked for 15 years as a supervisor machinist, the only job she has ever had. She said she also did not get all the payments she was entitled to under the Covid-19 temporary employer and employee relief scheme (TERS).

“I believe that retrenchment was illegal. Unfortunately, the Department of Labour team leader told my employer I had complained to them. Now I cannot get a job anywhere, even with my experience. A factory in Mossel Bay said they were planning to hire me but my former employer had told them not to,” said Mapapa.

“It is too difficult because that was my only job, so I have only one reference. I am at home and I am suffering. I am so stressed and I would love to open a case against the Department of Labour for disclosing my name to the employer,” she added.

The father of the family, Petros Mapapa, 56, was medically certified as 80% physically impaired a few years ago after an injury at work. A security guard, he was a passenger in a work car with three other security guards when it crashed in November 2012, leaving him trapped in the car.

“My colleagues first called the boss. He said to wait there to be picked up. Nobody even called the ambulance or the police. Someone driving past came to my aid and pulled me out of the car. He took me home because I could not walk,” Mapapa said. He was told to go to the local clinic three times before he was finally referred to the George hospital two months later.

While he was in hospital, he was fired. He was later diagnosed with neurogenic claudication with multilevel spinal stenosis. The accident had compressed his spinal nerves, leaving him with terrible back pain. Spinal stenosis can eventually result in paralysis. Petros battled for eight years to be paid compensation from the department’s Compensation Fund, initially being told that someone had already received his payout for him. Later he was told that this was an error, there was no payout and his “file was missing”. A few years later, in 2017, he received a letter signed by “CD Phamoli, Compensation Commissioner” saying his case was still being assessed.

The next letter from Phamoli was more positive and said Mapapa would be compensated and have his medical expenses covered as soon as he supplied a final medical report indicating the level of his impairment. Mapapa’s doctor submitted a report, which assessed him as 85% physically impaired. But in 2018, Mapapa received a letter from the new compensation commissioner saying that further specialist reports from radiologists and neurologists were needed. However, the fund never arranged these tests and the case remained in limbo until 2020, when Mapapa was finally told during lockdown that his claim had been rejected. This came just after his wife had lost her job and without the correct medical tests ever having been done.

‘Officials are fooling around with me’

His wife’s retrenchment forced Mapapa to contemplate returning to work as a security guard, but he was not physically able to do the job. The couple are still several years away from being eligible for a state pension and both were unable to secure the special Covid-19 grant. Petros keeps himself busy assisting other workers and community members through his organisation, the Southern Cape Community Forum (Socacof), but this work is unpaid.

Mapapa appealed the compensation commissioner’s decision to reject his claim, but got no response. Robin Williams, a claims processor at the Western Cape Department of Labour, said the claim would be going to a tribunal hearing in May. However, Mapapa has not been informed of this, nor even been told when the tribunal will take place. He now needs an attorney to call expert witnesses and cross-examine the compensation commissioner, but has not been offered any medico-legal support.

“The different officials are fooling around with me. My file went missing. Then the public hospital came after me legally to pay my bills from the accident, although this was the employer’s responsibility. I can’t believe there is an entity established by the government to assist people who are injured at workplaces, and liability was accepted for my injuries but I have never received a payout. I found myself belittled and humiliated by these officials for the entire eight years of non-payment of my claim, where I am sent from pillar to post,” he said.

The Mapapa family have three children at home – two adults aged 29 and 25 and a teenager who is 15 years old. Only two of the adult children in the family of six have received the Covid-19 grant of R350 a month. The eldest child in the Mapapa family, Anathi Mapapa, 30, does not live at home. He is the only employed person but has his own dependents to support.

“My family has not been the same ever since my father’s accident at work. We struggle a lot. As things stand right now, life is horrible,” said Anathi. He suffered his own hardship during lockdown when he attempted to secure a R10 000 loan to help his family and fell victim to a scam. A company pretending to be a microlender called Blue Financial Services provided him with a loan agreement on a fake attorney letterhead, promising him R10 000 if he paid R2 999 to secure the loan. But as soon as Anathi had paid, the fake company disappeared with his money.

Protests organised by the #PayTheGrants coalition, made up of 160 organisations, including the Black Sash and the Institute for Economic Justice, took place in Soweto’s Freedom Park, Diepsloot, Jackson’s Drift in Johannesburg East, eQonce and Middledrift in the Eastern Cape and Delft in the Western Cape on 27 April and 30 April. Protesters called for food prices to be lowered, for the Covid-19 grant to be extended and increased, and for the government to introduce a permanent basic income grant for all adults.

Shaeera Kalla of the #PayTheGrants coalition said, “We face a crisis upon a crisis. We face the crisis of an uncaring state, having just commemorated 27 years of democracy. People continue to ask how can we be free if we live in conditions that are so unjust? We are hungry, we are landless and we are struggling to get by because we cannot find employment.”

The coalition decried the government’s R110 billion in budget cuts to grants, public health and public education, which “break the Constitution’s promise to improve the quality of life for all”, said Kalla. The coalition called for the special Covid-19 grant to be increased to R585 per person, per month (the food poverty line), and for it to be extended to female caregivers, who are currently excluded if their children already receive a child support grant.

Winnie Masilela, a member of the coalition, said continuing the grant was the least that the government could do to support the thousands of workers who were fired or retrenched during the lockdown.

“Let us unite and stand against the termination of the C-19 SRD grant. We have lost our jobs due to the pandemic last year, now the government is taking back the money that fed us. #PayTheGrant R585 is the money that we are expecting because some of us are single parents, we don’t receive any basic income… how are we going to survive?”

Editor’s note: There has been no announcement of a further extension of the grant, which ended on 30 April. Notices have been put up at some Sassa offices informing people not to make new applications for the grant as it has ended.