Homeless Centre Offers a Free Hot Meal with the Vaccine

Cape Town NGO provides a free hot meal and coffee to encourage the homeless and those without an ID number to get the vaccine. 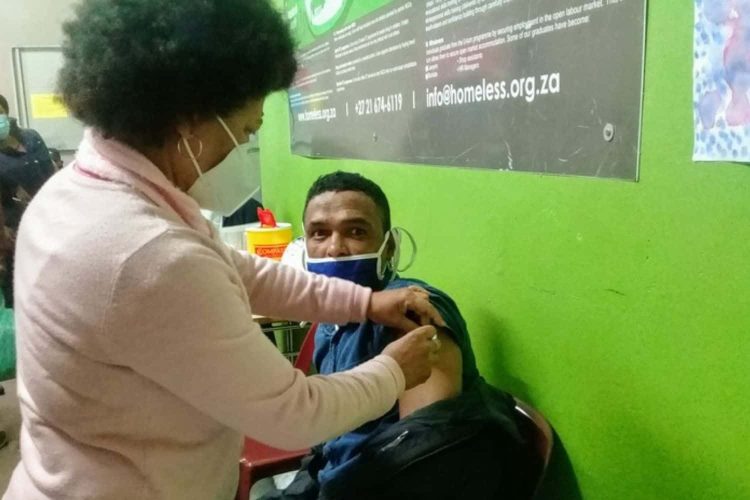 U-Turn, a non-profit organisation that focuses on the rehabilitation of the homeless, offered a free hot meal and a coffee along with the option of receiving the vaccine. They are one of many organisations in Cape Town that have started pushing towards making vaccination more accessible for all.

More than 60 people, most of whom were homeless, queued at the U-turn Homeless Service Centre in Claremont to receive a free hot meal after getting their single-jab Johnson and Johnson vaccine against Covid-19 this weekend.

Unlike many other vaccine sites, those wishing to be vaccinated were only asked to write down their identity numbers if they had one. If they did not, then their name and date of birth were used for registration. The government’s vaccine registration system has been criticised for not catering to people without identification, so this was done to get around this shortcoming.

Most people arrived from 9:30am to stand in line. Hands were sanitised, and personal information was collected by U-turn staff members.

Homeless People were called into the facility in groups of three, where they were registered and received the vaccine. After receiving the vaccine, they waited the required 15 minutes where they were also served a free cooked meal and coffee.

“As the time went by I felt more relaxed. So now I’m looking forward to getting vaccinated,” said Rashieda Eksteen, 32, from the Moira Henderson House shelter in Woodstock who came with her friend Jennifer Jacobs, 40, for moral support.

Eksteen said she had been hesitant to get vaccinated after her boyfriend had a fever as a side effect after getting his jab two weeks earlier. Most eligible people in her family have already been vaccinated. “We live in a world where you don’t know if the next person has Covid-19, so rather be safe,” she said.

Andrew Swartz, 29, said he had Covid-19 this year and was hospitalised for it three times. He has lived on the streets in a makeshift structure in Newlands for 15 years. “I’m very happy that I survived Covid. I was passing by U-turn when they told me about this. I was thinking about whether to come or not because I just heard about the vaccine but I didn’t know what it was. So I decided to just come, and I’m glad I did.”

Swartz said the onsite healthcare workers explained the vaccination process to him, which helped erase any doubts he had about getting vaccinated.

U-turn is an NGO that focuses on the rehabilitation and reintegration of homeless people and this event was in partnership with the Western Cape Department of Health’s vaccine plan to reach people who otherwise might go unvaccinated.

The organisation has three service centres in Claremont, Muizenberg and Mitchell’s Plain, and supports between 1,800 and 2,000 clients yearly.

U-turn’s director Jean-Ray Knighton-Fitt said, “U-Turn is following the lead of Hope Exchange in the City led by Reverend Annie Kirk, who set up a similar initiative a few weeks ago. Many organisations in the sector have been pushing for just such a solution.”

“We wanted to create a welcoming and safe space with a meal where people could have access to the vaccine if they choose to,” said Knighton-Fitt.

Tamzin Adriaans, U-turn’s manager in Claremont, said that Friday’s vaccinations went a lot better than expected. “A lot of clients voluntarily came and got themselves vaccinated. It’s amazing to see how many of them were willing to take care of their health to make sure that they’re okay and to also limit the spread from their side.”