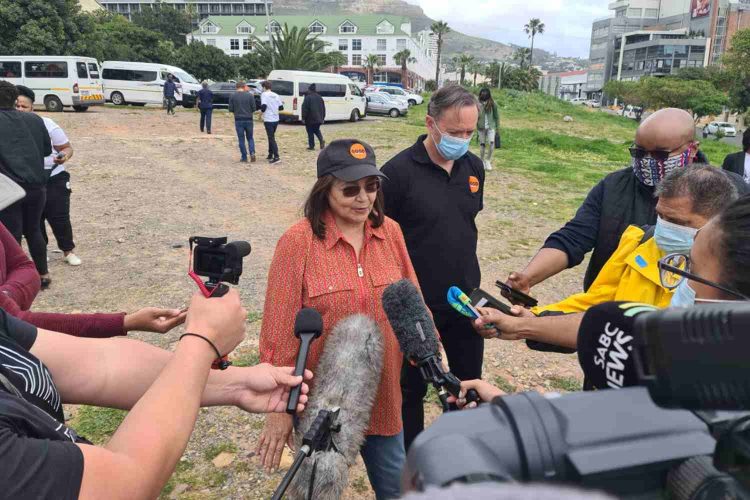 Leader of the GOOD party and Public Works Minister Patricia de Lille held a media briefing on Monday, where she gave a scathing response to her former ally’s proposal on affordable housing.

The bitter war of words between Cape Town’s former mayor and the Democratic Alliance (DA) reared its ugly head last week when mayoral candidate Geordin Hill-Lewis submitted a memorandum at De Lille’s office, demanding the release of the parliamentary village located in Acacia Park to the hands of the private sector.

This 568 000sqm estate, situated within close proximity to Century City, has cost the Public Works Department an estimated R74 million between January 2018 and November 2020, according to Hill-Lewis.

“That is why I have written to De Lille, requesting her department to immediately terminate its lease over Acacia Park so that the City of Cape Town can undertake negotiations to buy the site from its owners, after which the land must be released to the private sector to build hundreds of affordable housing units,” he said.

In a response to the memorandum, De Lille told reporters outside Food Lovers Market, on the corners of Canterbury and Rowland Street, that the DA’s stance on affordable housing is nothing more than “a big blue lie.”

The minister accused Hill-Lewis and his team of playing childish and dangerous games “that come with a lack of experience.”

“The housing at Acacia Park is intended for those members of parliament who do not live in Cape Town but are required to be here for their legislative and oversight tasks,” she said.

Furthermore, the former mayor, affectionately renowned as ‘Aunty Pat’, called out the irony of the DA’s proposal for the termination of the Acacia Park lease when, in fact, 60 of its MPs “are allocated a home in one of the parliamentary villages.”

“So far, it’s only Mr Hill-Lewis who requested his lease be terminated – but he in any event lives in Cape Town.

“I am not sure if Hill-Lewis had a mandate to make this proposal. Some of his colleagues have reached out to me to say they were not consulted and do not want to lose their Cape Town accommodation,” De Lille added.

How much Cape Town Premier home is costing the govt

The GOOD party leader reiterated her intention to make affordable housing in inner-city Cape Town a reality. According to De Lille, vacant military land is currently being assessed for occupancy and if all boxes are ticked, it could be made available for mixed-income housing.

“I have thus actioned the call I made as the Mayor of Cape Town to make this land available for housing and the Department of Defence has commenced the assessment of their operational requirements for the land in question.  This work begun months ago,” she added.

De Lille launched another attack on the DA-led Western Cape government. The 70-year-old reminded Capetonians of the fact that, despite the party’s claims of fighting to provide more equitable land access to the poor, a majority of its MECs enjoy the fruits of living in provincial housing, free of charge, with domestic and maintenance service charges absorbed by the state.

“Leeuwenhof is situated in the heart of Gardens on 57500sqm of land and is valued at R154 million. If the DA is serious about public office bearers relinquishing their state-provided housing, they have not demonstrated this where they govern,” De Lille said.