After a whole day of trying to contain the situation at Parliament, it has been confirmed that a man has been arrested in connection with the fire. 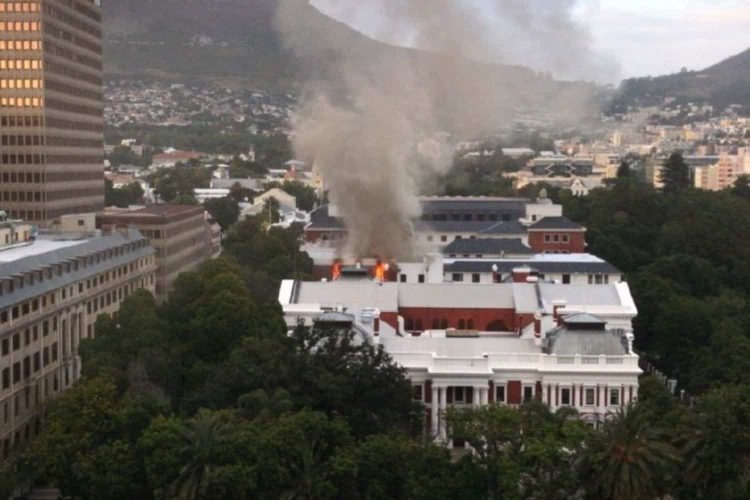 During the morning hours of Sunday, a massive fire broke out at the South African parliament building in Cape Town. In the process, the fire has caused the roof of the old National Assembly building to collapse – causing fear of further damage.

The City of Cape Town Fire and Rescue Services were notified of the fire at 06:12 and immediately sprang into action. And throughout the day Roeland Street, Sea Point, Salt River, Brooklyn, Goodwood and Milnerton firefighting crews were on scene.

A “very sad day for democracy”

Public Works Minister, Patricia De Lille, gave a statement earlier in the day where she ensured that everything was under control “for now” and that they “will be continuing with the investigation as to the cause of the fire”.

“The fire is currently in the National Assembly chambers. This is a very sad day for democracy for Parliament is the home of our democracy.”

Looks like #CapeTown #Parliament is on #fire … all required services are on scene. Avoid the area and give way for additional emergency vehicles. pic.twitter.com/J37Wmfl7nC

Fire investigations leads to an arrest

According to initial reports, the fire started in one of the older buildings in the precinct which leads to a security cordon near the cathedral where the ashes of Archbishop Desmond Tutu were buried on Saturday.

And President Cyril Ramaphosa confirmed at the scene that an arrest had been made.

“Someone has been held right now and is being questioned.”

Police spokesperson, Brigadier Vish Naidoo, confirmed that “a man of 51 years of age has been taken in for questioning in respect of the fire which broke out in Parliament today.“

It was then further reported that the Hawks have officially taken over the case.

And according to De Lille, a team was in place to protect the president’s office in Cape Town from the fire, as it is very close to Parliament.