Sex workers, marching for pride day, are given easy access to various STD tests as well as the Covid-19 vaccination. 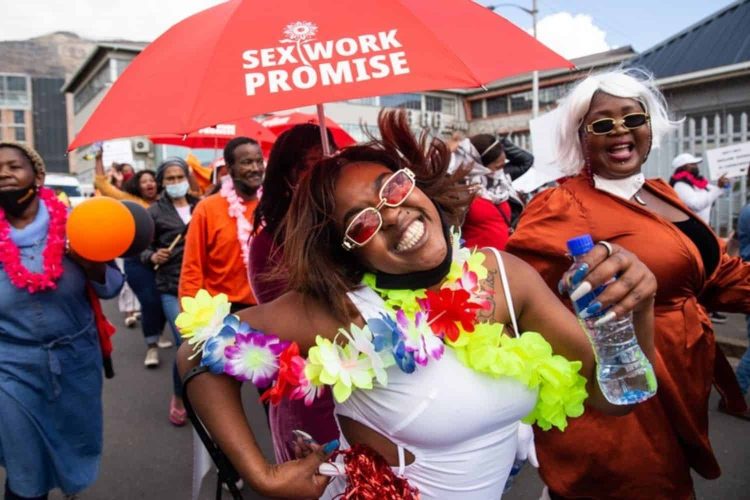 Along with other tests for sexually transmitted diseases, such as HIV, the covid-19 vaccination was made readily available to sex workers marching through Cape Town for Sex Workers Pride Day.

Dozens of sex workers and advocacy groups celebrated International Sex Workers Pride as they marched in colourful attire through the streets of Cape Town on Tuesday.

The event also served as an opportunity to vaccinate sex workers against Covid-19 and offer testing for STI’s, HIV and access to items like condoms and lubricant.

The march, organised by Sex Workers Education and Advocacy Taskforce (SWEAT), started at the Mowbray police station where sex worker Robyn Montsumi died in police custody in April 2020. From there, the marchers went to the Blackpool Sports Complex in Salt River, where a number of organisations are to erect pop-up information stalls. The Sex Worker Theatre group performed.

Megan Lessing, communication officer for SWEAT, said the march highlighted some of the challenges that sex workers face daily. She said many sex workers still do not have access to health services.

Lessing said that because sex work is illegal in South Africa, sex workers are vulnerable to abuse by police, clients and intimate partners. A 2021 national survey showed that female sex workers experienced high levels of violence.

Gulam Petersen, one of the transgender sex workers and lobby officer for SWEAT, received the vaccination against Covid-19 at the pride event.

Gulam Petersen, a transgender sex worker and lobby officer at SWEAT, was among those vaccinated on Tuesday.

Petersen, who has been a sex worker for about 30 years, said Covid-19 had prevented many sex workers from going out at night to work unless they were meeting regular clients.

The criminalisation “dehumanised” sex workers and drove them underground, Petersen said, where they were vulnerable to “gangsters and pimps”.

Also in attendance was Western Cape MEC for Health Nomafrench Mbombo. She said that the fact that sex work is a criminal offence “does have a huge impact” on sex workers’ ability to access health services.

“We are not condoning the issues of sex working but we are saying that they are already here,” she said. “There is no social distancing in sex work”, said Mbombo, so vaccines “must be brought to them in order to protect them and their clients,” she said.

Text and Photos by Ashraf Hendricks