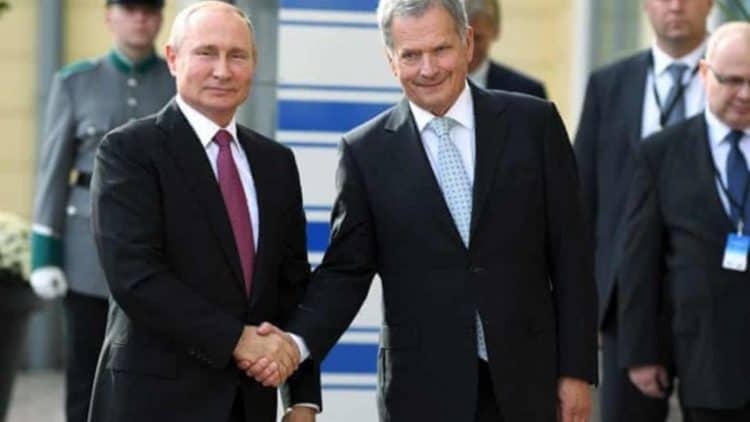 Vladimir Putin and Sauli Niinisto in 2019.

Russian President Vladimir Putin warned his Finnish counterpart on Saturday that relations between the two neighbouring countries would be “negatively affected” if Finland becomes a member of NATO.

The Kremlin’s press service said in a statement that Vladimir Putin told Sauli Niinisto that Finland’s abandonment “of its traditional policy of Neutrality would be an error since there are no threats to Finland’s security”.

The statement added: “Such a change in the country’s foreign policy could negatively affect Russia-Finnish relations, which had been built in the spirit of good neighbourliness and partnership for many years and were mutually beneficial.”

The response comes after a phone call conversation between Niinisto and Putin on Saturday, where Niinisto said Finland, a military non-aligned country, which has a history of complex relations with Russia, “will decide to apply for NATO membership in the coming days.”

Niinisto’s office said the Finnish head of state told Putin how Finland’s security environment had changed since Russia’s invasion of Ukraine which began on 24 February and continues to this day and pointed out Russia’s on Finland to refrain from seeking membership from NATO.

“The discussion with Putin was straight forward and unambiguous and was held without exaggeration. Avoiding tensions was considered important,” said Niinisto, the President of Finland since 2012 and one of few western leaders who have been who have been in dialogue with Putin over the past decade.

Niinisto pointed out that he told Vladimir Putin at their first meeting in 2012 that “each independent nation would maximize its own security. That is still the case. By joining NATO, Finland will strengthen its own security and assume its responsibilities. It is not something away from anybody,” Niinisto said.