Be prepared with today's Weather Forecast: 29 May 2022. Stay updated with the latest weather forecast and warnings across South Africa.

by Adelaide Havinga
in Weather 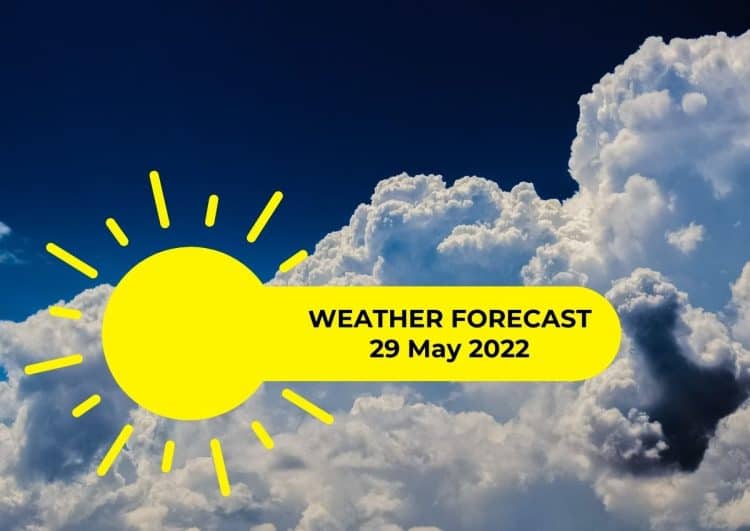 Make sure that you know what is going on with today’s Weather Forecast: 29 May 2022.

A yellow level 2 Warning: for damaging winds is expected over the north eastern interior of the Eastern Cape and along the coast between Knysna and Coffee Bay, resulting in localized damage to settlements, localized problems for high-sided vehicles and disruptions to beachfront activities.

Fire Warning: Extremely high fire danger conditions are expected over north western parts of Eastern Cape, the central parts of the Northern Cape and over the western part of the Free State.

Warm in the Lowveld and the escarpment areas, otherwise fine and cool becoming partly cloudy in the western Highveld, where mist patches are expected in the early morning.

Morning mist over the central parts, otherwise partly cloudy and cool to warm becoming fine by the afternoon.

Partly cloudy over the eastern parts, otherwise cloudy and cool to cold with scattered to widespread rain and showers in the south west, otherwise isolated, spreading eastwards over the remainder of the province from mid-morning, clearing from late afternoon.

The wind along the coast will be fresh to strong westerly to south-westerly reaching near gale force for the eastern parts of the south coast from the afternoon. It will become moderate to fresh southerly to south-easterly along the west coast from evening.

Morning fog patches, otherwise partly cloudy to cloudy and cool, but cold with isolated showers and rain in the south.

The wind along the coast will be moderate to fresh northerly to north-westerly.

Partly cloudy and cool, becoming cloudy with isolated showers and rain from late morning, but scattered in the south. Light snow is expected over the northern mountains from evening.

The wind along the coast will be Moderate north westerly, becoming strong south westerly late morning, reaching gale force in places in the afternoon.

Fine and warm but cool in the south-east, becoming partly cloudy to cloudy in the east with isolated evening showers, spreading to the south and south west.

The wind along the coast will be moderate to fresh northerly north of Mandeni, otherwise south-westerly spreading to St Lucia in the afternoon

This was the Weather Forecast: 29 May 2022. Make sure not to miss out on any of the updates by bookmarking this page.