Springbok Sevens coach Neil Powell will coach the Blitzboks for the final time this weekend before moving to the Sharks in Durban. 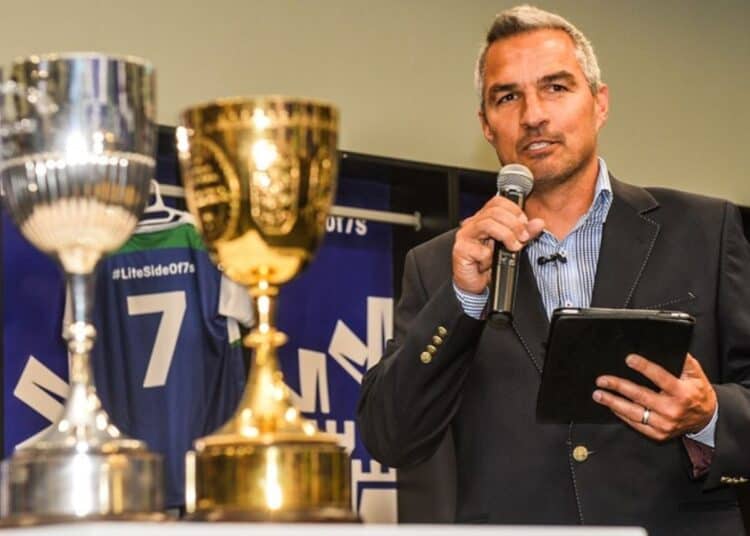 Life does not always deliver a fairy tale ending and he has experienced enough highs and lows in 15 years of sevens rugby to realise that, but for Springbok Sevens coach Neil Powell, a last hurrah at Rugby World Cup Sevens in Cape Town this weekend will be a fitting end to an illustrious career in this fast-paced version of the game.

Powell, who two Commonwealth Games gold medals, three HSBC World Rugby Sevens Series trophies as a coach and one as a player, and bronze medals at the 2016 Olympic Games and the 2018 Rugby World Cup Sevens respectively – there is still one tournament he would dearly love to win, the 2022 Rugby World Cup Sevens.

“I think it ranks up there with the Olympic Games in terms of prestige,” said Powell on Thursday.

“Much of it has to do with the format, where you cannot afford a defeat. I know it does not always end in fairy tales – sevens rugby has shown it is way too unpredictable for that – but yes, it will be a good ending if we can be singing the national anthem before the final game Sunday in what will be a packed Cape Town Stadium.

“That would be the perfect way to end my time with this team and sevens rugby.

“Having said that, I can promise you that it is not a topic of discussion in the team at the moment. Before we get to Sunday, we have a job to do on Friday and another one on Saturday.

“If we do not do those properly, the Sunday finish will not be what everyone is hoping for. We cannot look past the very first game – in this case, Friday night when we play the winner of Germany and Chile. That will be the only focus for us,” Powell added.

For the coach, some inconsistencies in their play in the last couple of World Series events created concerns, but the offset was an almost perfect match against Fiji in the final of the Commonwealth Games.

“Yes, we managed to do very well there as we tweaked our game slightly and other teams could not adapt in time. We have something similar in our approach in Cape Town this weekend,” said Powell.

“Cape Town as a venue has been stunning, we are so well looked after and the crowds are so vocal in their support of the team, that this was our favourite stop in the time that I have coached the team. We have this wonderful opportunity to be playing at home and that will be a massive boost for us.”

Blitzbok captain Siviwe Soyizwapi said the delivery of a Rugby World Cup to South African sporting fans would be massive, but the squad also want to have Powell lifting the Melrose Cup as the winning coach.

“We are certainly going to try and win it for the coach,” said Soyizwapi.

“He has been so instrumental in all our careers, not only as a coach, but also as a mentor and father figure. He will be sorely missed once he is gone, but we still have him for a couple of days and must use that time to make sure we give him a proper send-off.”

Soyizwapi, who scored six tries in San Francisco in 2018, also hailed the venue and local support as crucial to their possible success.

“We’ve had some memorable weekends here in Cape Town in the past,” he said. “We have not played here since 2019, so it will be some homecoming. This is our one opportunity to play in front of fans and family, this time around we have the added motivation of giving coach Neil that perfect send-off.”

Playmaker Selvyn Davids was also full of praise when he spoke of Powell: “He changed my life around. I was having issues with my discipline and coach Neil changed that for me. I am a better person and a better player because of him, and no one can ask for more than that from your coach.”

For Impi Visser, who will make a return from injury and will be making his Rugby World Cup Sevens debut, the Powell factor will lift the squad, as will the impact from the Cape Town crowd.

“For us as players, it does not come bigger than this,” said Visser. “You are part of a once in a lifetime opportunity to play the Rugby World Cup Sevens in our own backyard and in front of your loved ones and supporters. If that does not bring the best out of you, nothing will.”

The Blitzboks’s first game on Friday is scheduled to start at 19h03, when they will face the winner of the match between Germany and Chile (11h29) – it’s also the final match of the opening day.

“We have done our homework with regards to both those teams and we will be ready for either of the two,” said Powell.

“We will have some time Friday, after the result is known, to start preparing for our opponent, whoever they are. Both deserve to be here, they have played some excellent sevens in recent weeks.

“For us, it will be about the process, the roles, the responsibilities, and the effort. If we do those things right, I will be an incredibly pleased coach.”

The tournament starts at 08h45 on Friday when the men’s teams of Ireland and Portugal play the first match of the 2022 Rugby World Cup Sevens.