The names of the candidates that have been nominated ahead of this year’s South African Football Association (SAFA) Elective Congress were announced at a Press Conference on Monday (6 June 2022). 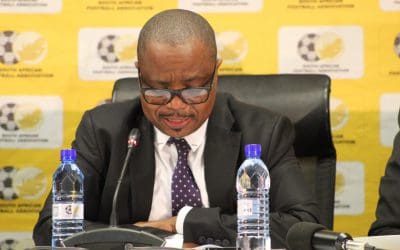 The five-member SAFA Governance Committee spent the past few weeks verifying the eligibility of all the nominees vying for various positions and handed over their findings to the Association’s CEO Advocate Tebogo Motlanthe.

Governance Committee Chairman Dr Victor Mogajane said he was handing over the finding of the eligibility of the candidates for the position of SAFA president, the national executive committee as well as the provincial office.

“We received about 65 nominees because in terms of the criteria we received for the president’s position, which is a contested area as we all know, four nominees came through in terms of the preliminary representation,” Dr Mogajane said.

“This was followed by the national list, which is 35 nominees, and lastly the provincial list, which is 26 nominees. So in total it is 65 nominees. We also looked at the women representation, but unfortunately in terms of these result, there are more males, who are 52 while the females are 13.”

SAFA CEO Advocate Motlanthe announced the names of all the candidates who met the eligibility requirements of the various positions after rec.

“On the presidential candidates, the eligible candidates for the SAFA presidency based on the information received as follows: Dr Danny Jordaan, Mr Solly Mohlabeng and Ms Ria Ledwaba. Those are the names of the candidate that eligible to stand,” he said.

The Elective Congress is scheduled for 25 June 2022.

The Governance Committee was approved by SAFA’s National Executive Committee (NEC) at the 30th Ordinary Congress at the Sandton Convention Centre on 26 March. The majority of the NEC members approved the appointment of the committee.

READ ALSO: Ronaldo: We’ll be back where we belong

The five-member SAFA Governance Committee is comprised of Dr Victor Mogajane as chairman, Tumi Dlamini as his deputy, advocate Anzel Laubscher from Western Cape, Abel Ramolotja from Limpopo and Shakespeare Hadebe from the corporate world as the other members of the group.

They were tasked with dealing with any issues around the candidates, and checking whether they meet the criteria for nomination in terms of the SAFA statutes.