Ronaldo was put on the bench after coach Fernando Santos was annoyed at his angry response to being substituted in Portugal's final group game. 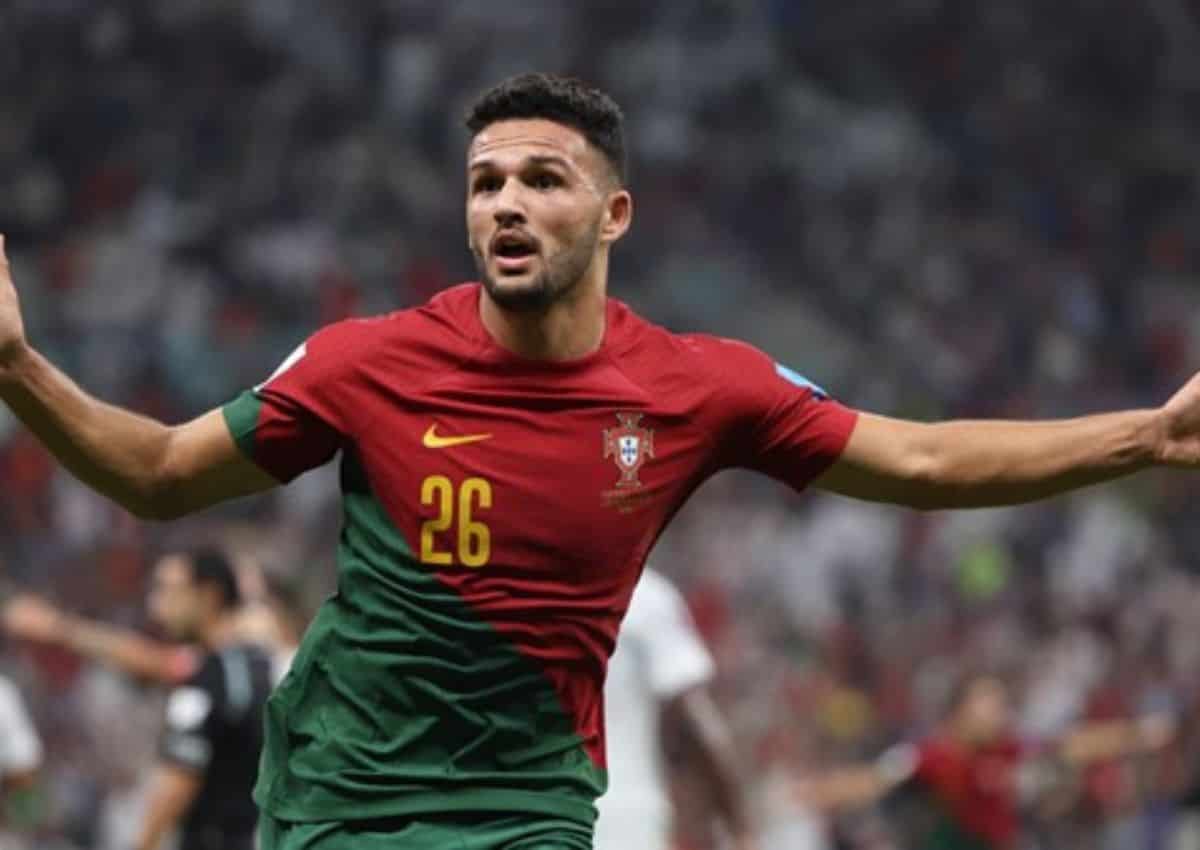 Goncalo Ramos celebrates as he scores his hat-trick against Switzerland. Photo via Twitter: @si_soccer

Goncalo Ramos proved himself as he started the game against Switzerland with Cristiano Ronaldo on the bench scoring a hat-trick on his full debut as Portugal demolished Switzerland 6-1 on Tuesday to reach the quarter-finals of the World Cup.

Portugal coach Fernando Santos benched skipper and all- time top goal scorer Cristiano Ronaldo, giving an opportunity to Benfica forward Ramos to prove himself despite the 21-year-old making his debut just three days before the World Cup in a friendly.

Ronaldo, the only man to score at five World Cups, was put on the bench after coach Fernando Santos was annoyed at his angry response to being substituted in Portugal’s final group game.

Ramos not only announced himself to the world by scoring a hat-trick, he also provided an assist for Raphael Guerreiro to score. Veteran defender Pepe also managed to get a goal as Portugal demolished Switzerland.

Ramos opened the scoring in the 17th minute by picking up Joao Felix’s pass before blasting the ball from a tight angle into the top corner, to give Portugal the lead.

Portugal doubled their lead as veteran defender Pepe scored with a header from a Bruno Fernandes corner in the 33rd minute.

Diogo Dalot sent in a cross six minutes after the second half resumed, with Ramos at the right place again near the post to slip the ball in the net to give Portugal a three-goal lead.

Portugal added salt on the wound with a superb counter-attack in which Ramos found Raphael Guerreiro who scored and gave Portugal a 4-0 lead in the 55th minute of the game.

Switzerland managed to get a goal back after Portugal failed to clear the ball.

This did not deter the Portuguese as they attacked and Ramos scored his hat-trick from a pass from Felix.

Substitute Rafael Leao put the icing on the cake by scoring in the added time to give Portugal a 6-1 victory.