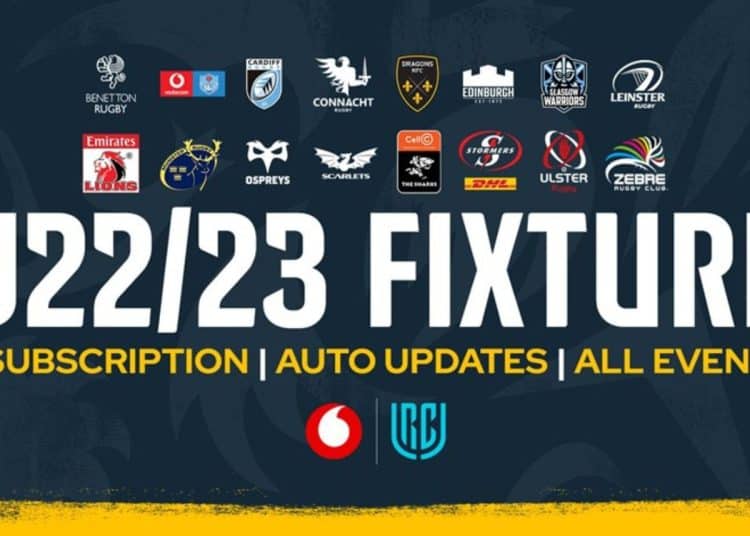 With kick-off times now confirmed for all 18 rounds of the Vodacom United Rugby Championship, fans can subscribe to the league’s innovative ‘Ecal’ fixture list that puts ticketing, the latest event details and broadcast listings directly onto their device.

The calendar subscription service which is used by the Premier League, The Hundred and Formula E links to phones and other digital devices through a free one-time subscription and will automatically update information related to games throughout the season.

After releasing the fixtures by round last week, the Vodacom United Rugby Championship on Friday revealed the kick-off times for each round after consultation with our seven broadcast partners in the UK, Ireland and South Africa.

Glasgow Warriors will bookend the start and finish of the regular season as the 2015 league winners will visit Treviso to face Benetton in the season opener on Friday, 16 September at 17h30 UK (18h30 local). The game will be live on Premier Sports and SuperSport as new Warriors head coach Franco Smith returns to the Italian city where he played and coached Benetton for a combination of nine years.

Smith’s team will also appear in the final game in Round 18 where Connacht will be the visitor’s to Scotstoun on Saturday, 22 April at 19h35 UK.

Returning to Round 1 and the first Welsh derby of the campaign will take place in Llanelli at Parc y Scarlets on Saturday with kick-off set for 17h15 (live on Premier Sports). All Welsh derbies will kick off in mid and late-afternoon time slots thanks to support from Premier Sports, BBC Wales and S4C.

Johannesburg will play host to the first South African fixture of the season with the Emirates Lions taking on last season’s beaten finalists, Vodacom Bulls, on Saturday, 17 September 16h05 (15h05 UK and live on SuperSport and Premier Sports).

Later on that Saturday, the first Irish derby fixture of the season is set for a prime-time slot at 19h35 UK as Connacht travel to Belfast to play Ulster live on BBC Northern Ireland.

Defending champions DHL Stormers will make their first appearance of the season in Round 2 as their derby with Cell C Sharks is deferred until February. John Dobson’s team will host Connacht in Cape Town on Saturday, 24 September at 17h45 (16h45, live on SuperSport, Premier Sports and RTE).

Last season provided an historically competitive final weekend with teams vying for Play-Off ranking and Heineken Champions Cup places – and the new campaign looks set to deliver just as much drama in Round 18.

In South Africa, giants will collide in back-to-back fixtures with eight-time league champions Leinster making their first-ever visit to the iconic Loftus Versfeld Stadium in Pretoria to take on the Vodacom Bulls at 16h05 (15h05 UK, live on SuperSport and Premier Sports).

Immediately after this the action will switch to Durban, where the Cell C Sharks entertain Munster at 18h15 (17h15 UK, live on SuperSport and Premier Sports). RTE and TG4 will split the coverage for those fixtures in Ireland.

Martin Anayi, Vodacom United Rugby Championship CEO, said: “The confirmation of kick-off times makes the prospect of the new season all the more tantalising. Our broadcast partners have done their best to work within the various complexities of our schedule to give our teams an incredible platform to perform on.

“We have a great news story in Wales where all three broadcasters have worked hard to produce more fan-friendly kick-off times after consultation with the regions. All Welsh derbies will have mid and late afternoon starts and that could not have been achieved without the support of BBC Wales, S4C and Premier Sports.

“It is always difficult to create the perfect schedule given our presence across five countries but after the success of Vodacom URC 1, we’re delighted to look forward and begin to drive the excitement and what the new campaign has to offer.”