Two speedsters will be joining the Springboks squad in the team as they prepare to take on Argentina at the Kings Park Stadium. 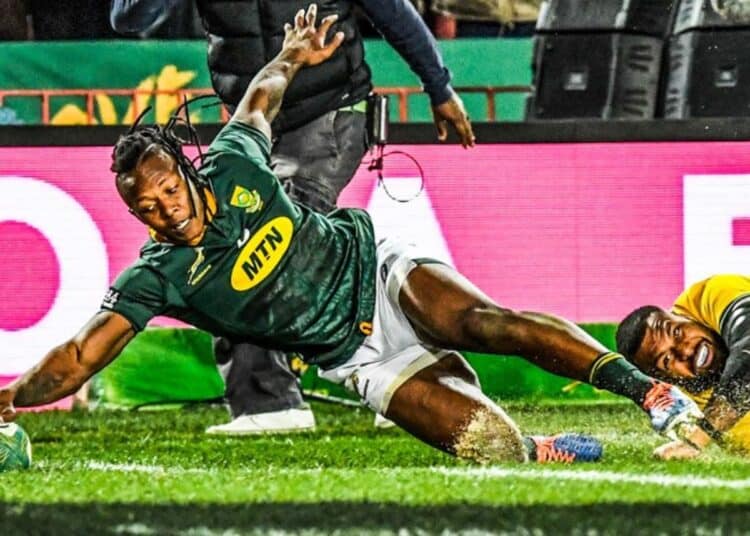 Sbu Nkosi and Kurt-Lee Arendse have been recalled to the Springbok squad for the final Castle Lager Rugby Championship match against Argentina at Hollywoodbets Kings Park in Durban on Saturday, while four players were released to their clubs to rack up game time as the competition reaches a conclusion.

Nkosi has recovered from the ankle injury that kept him out of Springbok action the entire year so far, while Arendse has served his suspension for a dangerous tackle in the match between the Springboks and All Blacks in Nelspruit and is back in contention for selection.

Meanwhile, Joseph Dweba (hooker), Warrick Gelant (utility back), Elrigh Louw (loose forward) and Salmaan Moerat (lock) have been released to their respective clubs to allow them to get valuable game time as the Springboks have a one-month break before gathering to prepare for the year-end tour, which will feature Tests against Ireland (5 November), France (12 November), Italy (19 November) and England (26 November) and mid-week matches against Munster (10 November) and the Bristol Bears (17 November) respectively.

Furthermore, Damian Willemse (flyhalf) sustained concussion in Saturday’s 36-20 victory against Argentina in Buenos Aires and will also return to his franchise to follow the prescribed return to play protocols.

The Springboks are currently tied on 14 log points with New Zealand in the Castle Lager Rugby Championship. Depending on the outcome of the game between New Zealand and Australia, the Boks may need a bonus-point win or a victory by a convincing margin against Los Pumas as they currently trail New Zealand on 13 points on points’ difference.

“We have been pretty unlucky on wing in the last few months in terms of injuries, which has forced our hand at giving players such as Kurt-Lee and Canan (Moodie) a chance at international level, and we are pleased with the depth we are now building as we get closer toward the Rugby World Cup next year,” said Nienaber.

“Kurt-Lee had a great debut and played very well against the All Blacks, but he was unfortunately banned, and we are delighted to have him back as he’s a very talented player.

“Sbu has been in our system for several years now and he has recovered from injury, so we are excited to welcome him back. He has shown his class in several big matches, and he brings experience, so he will undoubtedly add great value to the squad.

“This also allows us an opportunity to take stock of the depth we have at wing as we are now a year out from the Rugby World Cup in France.”

Commenting on the players released to their clubs, Nienaber said since they had an idea of the match-23 they would like to select for Saturday’s rematch against Argentina, it made sense to grant those players an opportunity to build their game time with the year-end tour around the corner.

“This year alone we have given close to 50 players an opportunity to play, so we have certainly ticked the box of creating squad depth, which is one of our key pillars for the team,” said Nienaber.

“We are, however, going into our last match of the Castle Lager Rugby Championship and we think it would be more beneficial for these players to return to their clubs and provinces to gain valuable game time.

“We have a long and challenging year-end tour ahead, which will involve an expanded squad, and we need the players to be match fit so we can hit the ground running when depart for the tour.”

Nienaber will announce his match-day squad for the final Test against Argentina on Tuesday.