Manchester City manager Pep Guardiola has provided an injury update on City's new signing Kalvin Phillips as he was out this past weekend. 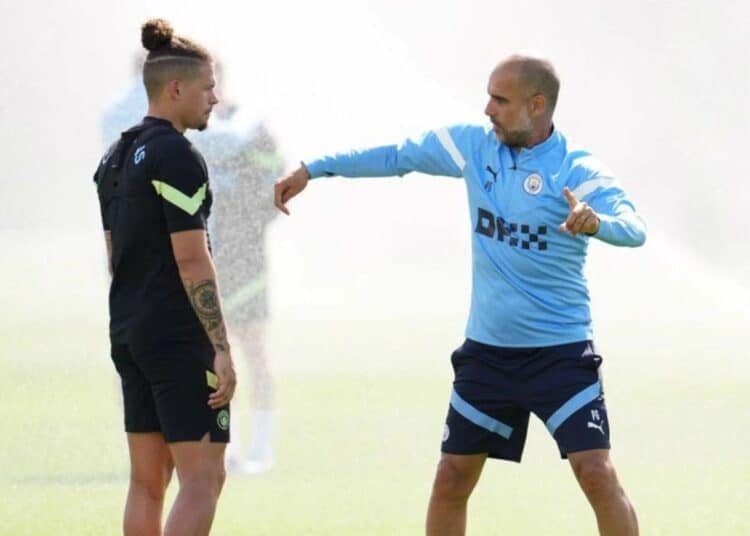 Guardiola has confirmed that Kalvin Phillips faces a spell on the sidelines with a shoulder problem – but says he is hopeful the England midfielder will be able to return to action ahead of this winter’s World Cup finals.

Phillips was left out of the matchday squad for Saturday’s 3-0 win at Wolves after suffering a recurrence of the shoulder problem he sustained in last month’s friendly away to Barcelona.

Guardiola said that depending on medical advice, there was the possibility our summer signing from Leeds could require surgery to cure the problem.

But when asked for how long he thinks Phillips will be out, the City boss added he was hopeful the 26-year-old would not be side-lined for too long a period.

And Guardiola insisted he was confident that Phillips – who was voted England’s player of the year for 2021 – would be fit in time to return ahead of the winter World Cup finals in Qatar which gets underway in late November.

“I don’t know (how long he will be out) – I’m not a doctor – but in a good way he can arrive for the World Cup,” Pep revealed in the wake of our Molineux victory.

“The doctor said the only solution right now is to do what he has to do.

“Now it will be not long but a little bit longer….

“Every time it’s out (the shoulder), it’s out and doctors (say that) when you have three or four times (where) it’s out (with) the shoulder, the only solution is to have surgery.”

It has been a frustrating start to life at City for the popular holding midfielder following his arrival from Leeds in the summer.

And Guardiola said that frustration was shared by him too as he knows the impressive qualities Phillips will bring to the City squad.

“Absolutely (it’s frustrating) – for us as well. We need him,” Guardiola added.

“Rodri cannot play all the games.

“Kalvin came for that, to fight for the position and sometimes we need two holding midfielders and (to be) more defensive.”

Ever wondered how your debt will be settled when you pass away?