Manchester City's Jack Grealish has hailed the impact of Erling Haaland in the wake of his explosive start to life at Etihad Stadium. 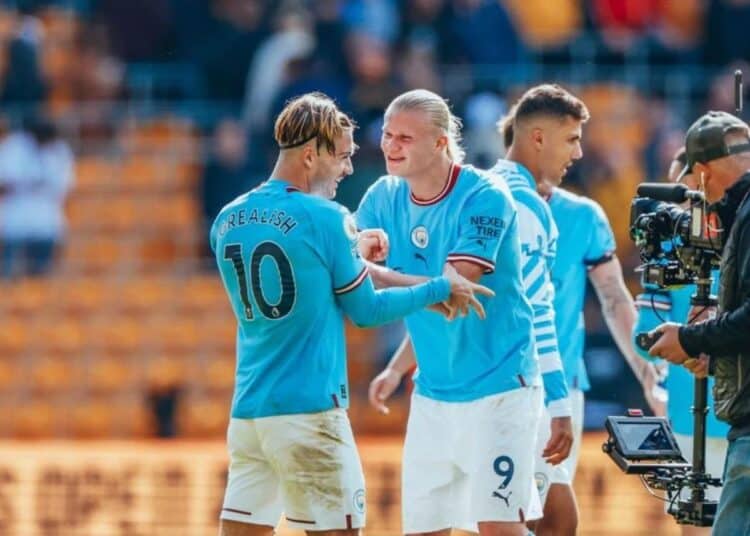 Grealish described the Haaland as ‘the best striker in the world’ on the pitch – and ‘a brilliant, humble person’ off it.

While Grealish was on target with his first goal of the season in Saturday’s 3-0 win at Wolves, Haaland struck again to register his 11th league strike so far – and 14th overall since his summer move to City from Borussia Dortmund.

The Norwegian’s incredible impact has only added to City’s dynamic attacking options.

And, for his part, Grealish believes that Haaland’s ability, desire and down to earth character have served to further reinforce what a quality addition to the squad he has proved to be.

“This year, in my opinion, we have got the best striker in the world playing up front who is just obsessed with scoring goals and being in the box, which is a brilliant trait for a striker,” Grealish declared.

“It changes all of our games compared to last season where we played with a false nine.

“I think it is down to us to put the balls in the box. I was just having a word with him then saying that ‘I didn’t even know you could score from outside the box!’ which he did on Saturday.

“He is honestly a brilliant person to be around. I cannot speak highly enough of him, he is so humble for what he has achieved already in his career.

“It helps that he can constantly put the ball in the back of the net as well.”

Meanwhile, Grealish revealed that he felt he had still to achieve 100 per cent match fitness this term.

The England international was side-lined for a number of weeks last month after suffering a muscular injury early on in the season.

But, in the wake of his goal and fine all-round display at Molineux, Grealish said he hoped his time away with the England national squad for September’s UEFA Nations League fixtures would further hone his return to full match sharpness.

And he was confident that when City resumed action next month, we would then see the very best of him.

“I still don’t feel 100 per cent but I think this season, including pre-season, I have only played about five games and one full 90 minutes,” Grealish asserted.

“I don’t feel up to full fitness yet but, hopefully, that will come with more games that I play.

“I am obviously away with the national team now, so hopefully I can get some more minutes there and can get my full fitness. I think that is when you will see the best of me.”

Ever wondered how your debt will be settled when you pass away?