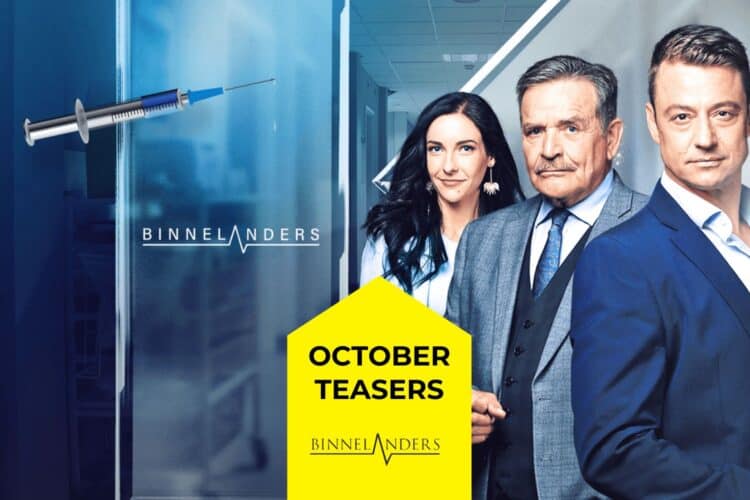 Coming up on Binnelanders this September 2022:

Table of contents for Binnelanders this October 2022

Niel loses his head, and Danny gets more than just the wind knocked out of his sails. Rita has conditions to help, while Jacques wants nothing to do with the whole situation. A party gets the necessary attention – and reaction!

Karen confronts Dawid, while Andries tries to save what he can. Tracy’s search for the truth brings her more than she bargains on…

Tracy and Conrad are at loggerheads again, and Jeremy convinces Annelize of a plan. A call on Tracy’s phone is not Tracy. Liam tries to focus on his work, but Annelize and Karen are not making it easy. Danny hears how Chanel is discussing Zee, and At takes on Annelize.

Conrad tries to give Rita surety regarding Jonas, and it seems like at least one father and son can start repairing their relationship. Lukas’ surprise is not received well. Tracy is upset because she is the last one to find out what is going on, and Niel is livid over Danny’s accusations.

Jeremy has advice for Liam, and things between Conrad and Tracy are getting tense – and then there is a huge problem at the Koster mansion. Rita doesn’t bite her tongue, and Zee is shocked in what she hears. It is clear that Dawid doesn’t want to make an enemy of At, and a blood clot is the least of a patient’s worries.

A chance meeting with Lukas gives Conrad an idea, and Liam has news for Annelize. There are a few cats that are let out of the bag – but who is honest about their motives? A kiss leaves someone speechless, while Rita is not the only one that is scared.

Harsh words fall between a doctor and patient, and Jonas is very smooth – and convincing – with his mouth!

Danny shows some initiative, while Rita gets herself in a dangerous situation. At reveals the next step in his plan. Lukas’ first day ruffles a few feathers. Zee tries to make sense of her behaviour, and Jeremy confronts At.

A nervous Karen blurts out a secret. New love needs definition. Conrad gives Tracy a warning, and Dawid’s computer might just be the place that Jeremy can find his concrete evidence. A video makes an unforgettable impression, while Steve doesn’t have good news for Conrad.

A shooting might be the last thing a couple survives. Liam’s dark deed might have a silver lining, and Delia and Steve start spending time together. Conrad and Tracy’s falling out has big consequences, and news about a new relationship spreads like wildfire.

Lexi is aware of an accord, and Danny’s arrangements don’t sit well with Zee. While Jeremy thinks they should apply pressure to Liam, Dawid tells At what his biggest problem with the plan is.

Conrad makes a decision regarding Tracy – while the list of suspects grows. Tracy discusses her mistake with Lukas – and gets unasked for advice from him.

Relationships aren’t easy – and even more so if one doesn’t know where one stands. Conrad has to ask Sharon a favour, while Karen has a serious conversation with Annelize regarding Liam. Zee takes pity on Annetjie, and is very excited by the chance of working with Steve. Gunshots and a video cause havoc.

Sharon has news for Conrad, and Conrad words his feelings towards Louis. Obstacles in a relationship is something that can be worked on, and Annelize pleads with Conrad to change his plan. At has a solution for Dawid’s problem, and things are not the way they are supposed to be on the farm.

Dawid introduces his son to At. An invite from Steve makes Zee think very fast on her feet, while a kiss contributes to bigger tension. A desperate Sharon makes a promise to Conrad, and, once again, Liam’s assistance is needed.

Eventually Liam gets access to e-mails, and Lexi has love advice for Steve. Conrad receives a weird visit from Sharon, and a career move gets a lot of different reactions. A bit of good news doesn’t shorten the distance, but let emotions lead to dangerous actions…

Louis has had enough of the Jonas situation, and Conrad wants to go visit Albert. Liam tries to get more information, while tempers flare up on the farm. Danny is not the only one that messes with Steve’s head, and Annetjie extends an invite to Zee.

Steve asks his questions in a roundabout way, and Zee is stunned by another request. Liam tells Annelize and Jeremy what he thinks At’s plan is, while Conrad and Tracy are equally scared of what is happening. A surprise is on the cards, while it also becomes increasingly difficult to play open cards.

Danny takes Zee on regarding her confidence, while information could be the key to success. Dawid gives Annelize a warning, and a ‘last time’ could make a house of cards implode. At sees Liam at Binneland Clinic, while Steve gets a welcome surprise. Conrad opens his heart towards Tracy.

Liam is concerned about his relationship with his dad, while a serious conversation is interrupted by a message. Conrad and Annelize discuss the state of his relationship. Lukas is unhappy – and impatient! Annelize is on the warpath, and Delia definitely wasn’t born yesterday.

A kiss could be the beginning or end of everything. Despite At’s anger, Jeremy still wants to take him down. Naomi knows what needs to be done – and what to stay quiet about. Steve decides to mimic Delia, and Delia confronts Lukas – and has to then make a decision about Conrad.

Annelize knows how to rub salt in the wounds, and Liam is concerned about his participation in a plan. Anger is not something that one can control – and it destroys unconditionally. Steve tells Danny about Anoniem.

Steve begin to wonder about the identity of Anoniem. Rian asks Delia to not breathe a word about an  exciting piece of information. Heartache never occurs in silence – especially not if Binneland Stereo catches wind of it. Koos and Wendy’s reality leads to a falling out with Gaby.

Gaby is upset about Southern Hope news, and Anoniem’s identity is revealed. An invite overwhelms Tracy, while Naomi has to be harsh to silence Binneland Stereo. Perspective might be the best way to prepare for the future.

Premiere episodes of Binnelanders air on kykNET Mondays to Fridays at 19h30. The omnibus airs on kykNET on Saturdays from 09h30.

Follow the daily catch up for Binnelanders this October 2022 right here!