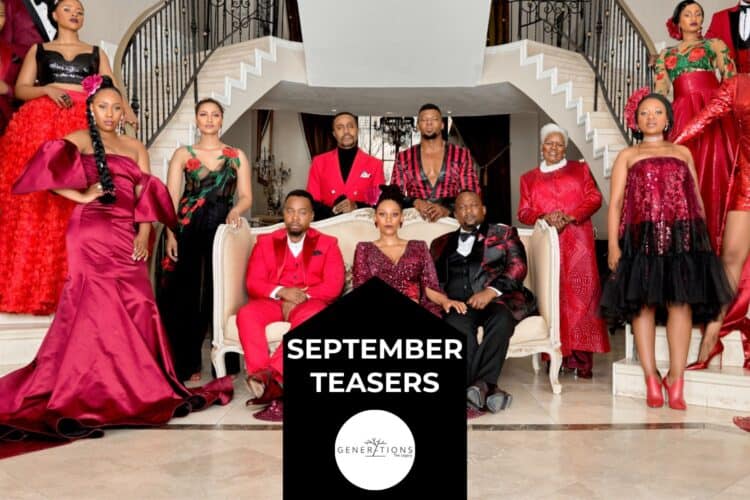 Coming up on Generations this September 2022.

Zondiwe’s had enough of her daughter-in-law’s moping around. Pamela got what she wanted so why is she not happy? Digging up a dead body is a sordid business to say the least…

Mpho is increasingly worried about his mentor’s state of mind. Kabisi is done playing nice – tomorrow the bomb drops. In his drunken state Lelethu finally reveals his true feelings.

Tracy warns the boys to tread lightly around their fellow housemate. Sphe has a way out, but can she allow herself to be that ruthless. Zikhona has a possible solution for Nontle’s family woes.

Nkosiyabo doesn’t get the warm welcome he was hoping for at work. The ex-lovers are ready to go head-to-head to win a challenge. A shock proposal from her ex leaves Fikile reeling.

Lucy has no problem playing dirty to help a friend. Kabisi’s self-serving agenda finally catches up with him. Mpho jumps at the chance to get justice for his friends.

Mazwi proposes. Well, sort of… Mrekza is ready to steal from his wife, if that’s what it’ll take to win. Pele knows not to make light of his Commander’s grim warning.

Ayanda is not willing to lose another person she loves… Zikhona once again bears the brunt of Nontle’s frustration. Sphe hears unexpected news and isn’t sure how to feel about it.

Nkosiyabo decides to use the Moroka news to his advantage. Pamela wants Lelethu to work with instead of against her. The arrival of Fikile’s children gets off to a bad start.

Kabisi is pleased when his enemy’s action backfires on him. Parenting teenagers is every mother’s worst nightmare. Is Pele about to cross a line that can’t be un-crossed?

Zikhona doesn’t agree with Nontle’s decision. The news from the police lab isn’t all good but there is a small breakthrough. Didi witnesses an intimate moment which changes her perspective.

Lelethu is determined to fix what he broke. The engagement party’s guest of honour is nowhere to be found… Ayanda decides if you can’t beat them, spite them.

Kabisi stands up to Fikile’s daughter for her. Pele makes a startling discovery under his desk. Seeing her ex having a great time does nothing for Pamela’s mood.

Zanele knows the warning signs and won’t stand for it this time! Tracy is the only one who notices Mazwi is not okay. Sphe warns Nkosiyabo to quit while he’s ahead.

Angry sex is followed by even angrier words. Mrekza‘s words hit a nerve for a friend. Luyolo knows something is fishy but isn’t sure what.

Ayanda is furious at Zondiwe for meddling in her affairs. Pele’s web of lies is growing bigger by the day. Fikile panics when she hears who’s coming to meet her.

Lelethu is torn between being a journalist or a shareholder. Nkosiyabo reveals he has ulterior motives for re-hiring his ex. Kabisi is floored to hear what the Moroka elders have decided.

Mazwi gives as good as he gets when his woman takes him on. The warden’s off-hand comments make Mpho suspicious… Pamela has renewed hope after Sphe’s visit.

Lucy and Didi make a startling discovery. Pele recruits his injured friend to bribe a nurse. Tracy saves the day for her boss.

Is Ayanda finally ready to move on? Writing the wedding vows becomes a team effort. The double date turns into a double disaster for one of the couples.

The warden warns Mpho can’t die in his prison. Is the Diale couple’s problem bigger than they realise? Mazwi draws closer and closer to a woman but she’s not the one he’s marrying.

Nontle’s talk about relationships sparks an idea. Pele is starting to regret making a deal with the devil. An unexpected kiss leaves two friends shocked and bewildered.

Lucy is determined to have more fun than Mrekza. Zondiwe knows how Ayanda can win back her man. Tracy is floored by what Fikile asks of her.

Generations airs on SABC 1 from Mondays to Fridays at 20h00.

Follow the daily catch up for Generations this September 2022 right here!