Fortnite just got a whole lot funkier with their soon-to-be-released Bruno Mars and Anderson Paak skin lines and radio station. 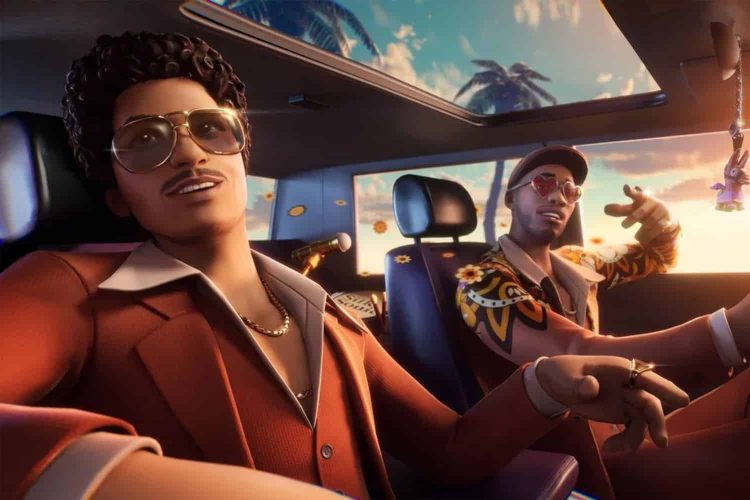 Silk Sonic’s smooth and sultry brand of R&B is coming to Fortnite. The popular game has announced that Bruno Mars and Anderson Paak will get in-game skins as part of the Icon series. Other cosmetics will also be available and a new Silk Sonic radion station will be available to listen to as you drive around the island.

All of the new Silk Sonic items will be available in the Fortnite in-game store from the 10th of February.

Get your Silk Sonic cosmetics

Both musicians will receive their own unique skins and cosmetic additions. Mars will be given the Sound Scepter Pickaxe and the Freedom Wheels Emote. The Pickaxe also doubles as a back bling when it’s not being used.

Paak on the other hand will get the Boom Bap Pickaxe and the Sonic Snare Back Bling. And Fortnite has confirmed that both skins will come with alternate styles for their in-game skins too.

Both Mars and Paak’s cosmetics will be available separately or as a bundle in the Silk Sonic Set.

Of course, the musical duo will get their own in-game radion station. Players will be able to listen to the Silk Sonic radio when driving with Icon Radio. And while the radio station will mainly be devoted to Silk Sonic when it launches, Epic Games will be adding other artists from the Icon series in the future.

Anderson Paak and Bruno Mars are not the first celebrities to be introduced into the game. The Icon series is Fortnite’s skin line that often gets used to introduce celebrities.

Musicians like Ariana Grande and Marshmello have been given their own skin line as well as athletes like Lebron James.

This is also not the first time that the members of Silk Sonic will be featured in the game. Bruno Mars has his own Fornite emote and Anderson Paak was part of a virtual concert series back in 2020.