Five down and nine to go for #teamhilux rally raid 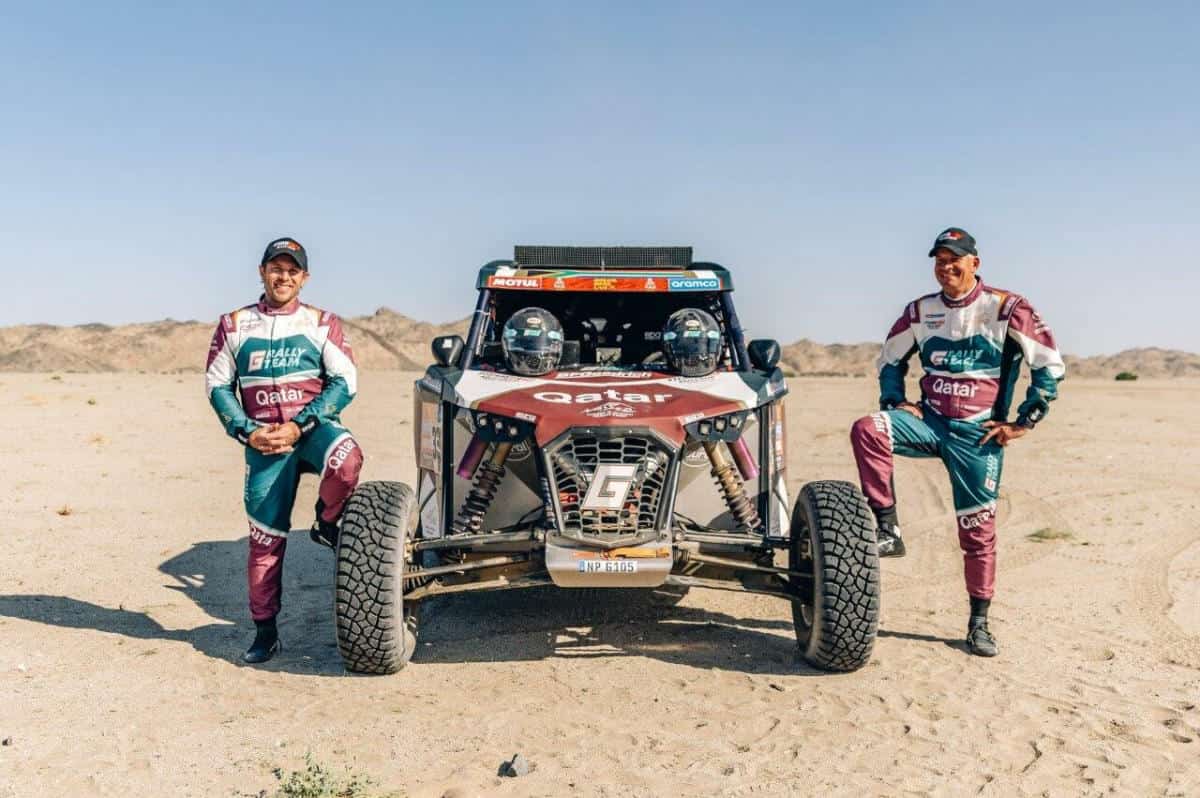 It has been a baptism of fire on the first five stages of Dakar 2023 for South African Rally-Raid Class T1 champion Eben Basson and his co-driver Leander Pienaar, racing in their first ever Dakar Rally in the Kingdom of Saudi Arabia. The pairing, who decided late in 2022 to take on the world’s toughest race is making a name for themselves in the hotly contested class T3 for lightweight prototype vehicles. After five gruelling stages in the northeast of the Kingdom, they find themselves in a very credible 8th position in their class.

“I knew that it was going to be a tough race and quite a challenge, but I couldn’t in my wildest dreams anticipate just how tough it would turn out to be,” said a tired Basson in the bivouac shortly after completing the fifth stage in the city of Ha’il. The crew started well by setting the tenth-fastest time during the short prologue on 31 December, but the real challenge started when the competitors left the Sea Camp to tackle the 368 kilometre stage that started and finished on the shores of the Red Sea. Basson and Pienaar started well, but they broke a steering arm in their OT3 race vehicle at the 70 kilometre mark. A few quick roadside repairs got them going again, but nearly an hour was lost. This was a relatively small incident in comparison with what was to follow. Later during the same stage, the OT3 and one of the giant racing trucks aimed for the same piece of desert, resulting in a collision on top of a dune. “It was like driving into a block of flats,” commented Pienaar. “It was quite scary to be honest.” Besides a few battle scars to the side of their OT3 race car, the pair was unscathed and lived to race another day.

Stage two was contested over 431 kilometres of extremely rough and challenging tracks between Sea Camp and the beautiful city of Al Ula to the north. “It is an incredible learning experience,” said Basson. “Not only do we have to get used to the terrain and the overall challenge that is the Dakar, but we’re also learning more about the car as each kilometre passes by. The car is similar in some ways, but in general it requires a very different driving style from what we are used to in our T1 car back in South Africa.” The Class T1 champion did however not take too long to get to grips as the 16th fastest time on the stage saw them move up the overall classification into 15th overall.

Stage 3 of the 2023 Dakar was one to remember. The heavens opened between Al Ula and the city of Ha’il, turning the desert into a mud bath with many flash floods making the route almost impassable. “A number of cars got stuck in a river. We managed to get through a little further down where the water wasn’t as deep yet, so we were very happy to reach the bivouac in Ha’il that evening,” said a cold and wet Pienaar. Their OT3 is not equipped with a windscreen and after braving the elements, the crew was indeed relieved to complete stage 3.

On stage 4, another tough test of driving skill that started and finished in Ha’il, Basson finally got the chance to display his raw talent on a global scale when he set the 6th fastest time in his class. This result also propelled the pairing into the top 10 in the general classification, a stellar performance by the Dakar rookies. “It is still early days, but it has been an incredible experience so far. I’m very happy with our progress and although we are obviously aiming for a good result, our main objective is to make sure that we reach the finish in one piece,” Basson continued. Pienaar was quick to add: “Eben’s driving has been amazing. I know that he hasn’t been in the dunes before, but he is taking to it like a duck to water.”

The South African #TeamHilux Rally Raid crew was now getting to grips with their G Rally Team OT3, and on stage 5 they received yet another opportunity to showcase their talent. Basson and Pienaar completed the 425 kilometre stage that started and finished in Ha’il in a time of 4:28:53. It was just 13 minutes slower than the stage winning time, but enough to claim his best stage position yet. The Mpumalanga-based businessman set the fifth fastest time, but more importantly moved up into eighth on the overall standings.

“This was a really good day for us,” commented an elated Basson after reaching the Ha’il bivouac for the final time. “It was extremely tough, not only on the car but also on our bodies. We made a decision to go as fast as possible but without taking any risks, and it paid off. I’m also getting used to the more and more each day, and am looking forward to the remainder of the race.”

The race will now leave the city of Ha’il and move to Al Duwadimi for both stages 6 and 7. Stage 8 will take the remaining crews to the city of Riyadh for a well-earned rest day before tackling the second half of the world’s toughest race.