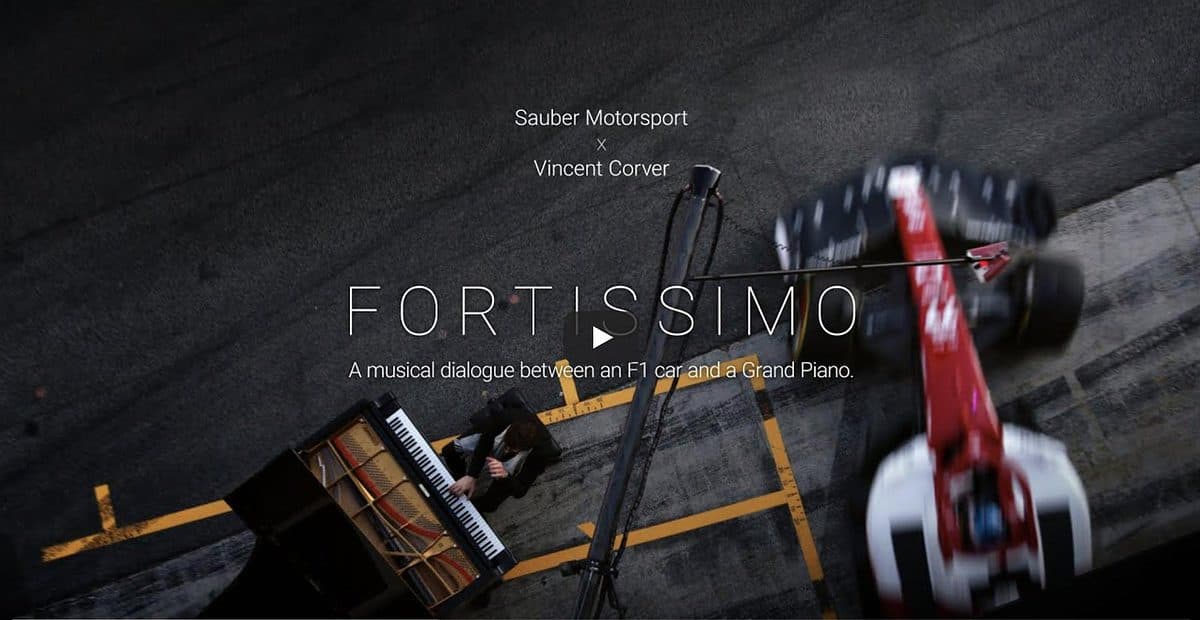 Hinwil, 6 December 2022 – Alfa Romeo F1 Team ORLEN celebrated a memorable season by releasing a unique piece of music, composed and performed by acclaimed pianist, Vincent Corver, and featuring sampling from the team’s 2022 contender, the C42. The piece is accompanied by a film featuring, in a world’s first, a running car alongside a Steinway Grand Piano; it comes to mark the 30th year in Formula One by Sauber-run teams and the final position of sixth in the constructors’ championship, the best result for the Hinwil-based operation in a decade.

In the musical composition, titled “Fortissimo” – a music term that also translates into the Italian for “really fast” or “really strong” – composer Vincent Corver conveyed the parallel between the technology of the team’s Formula One car and the flow of the sound created by the piano. Sampling of the C42’s engine and of the garage operation turned the car into a musical instrument, just as the team became part of the composition. The result, a captivating piece of music, is more than a score: it is a dialogue between car and piano, as the two chase each other around the Circuit de Barcelona-Catalunya, where the music was first recorded.

Award-winning pianist, composer and producer, Vincent Corver, boasts a career spanning two decades that saw him create music for brands, events and festivals and perform on the greatest stages of the world. The Dutch-born, Switzerland-based artist is a keen follower of Formula One, and his co-operation with Alfa Romeo F1 Team ORLEN represents his first foray into the world of motorsport – in a unique way.

“Fortissimo” was released in conjunction with a live performance of the piece by Vincent Corver at the team’s headquarters in Hinwil, with an audience composed of employees of Sauber Motorsport and their families, to further highlight the links between the music and the real heart of the team – the people working for it.

Frédéric Vasseur, CEO & Team Principal Alfa Romeo F1 Team ORLEN: “Formula One has a global reach and our team has experienced a surge in interest from fields far from our traditional audiences. It is an opportunity to reach out to new worlds, and we loved working with Vincent on this project. His vision for a dialogue between the car and the piano is something never done before like this, and the way he incorporated the sounds of our C42 and our crew in his music makes us feel part of this project. To us, racing is an art – and now, art has come to racing.”

Vincent Corver, artist: “I’ve followed Formula One for a long time and Alfa Romeo F1 Team ORLEN is my local team, so I have been dreaming about this collaboration for years. There is an affinity between a Grand Piano and an F1 car: both are highly complex systems in which each part contributes to the whole to create something special. Therefore, I knew we could combine these two elements to create something that had never been done before. It has been a long journey, one that brought us together, and it’s exciting to see this beautiful piece of music come to light now.”

“Fortissimo” by Vincent Corver is available as a single and official music video on Apple Music, Spotify, Amazon Music and other major music platforms; label: Silent Beat Records. The video for the piece is available on Alfa Romeo F1 Team ORLEN’s YouTube channel.