Almost 4000 brand new luxury cars were left to float on a burning vessel in the Atlantic Ocean after a Panama Cargo Ship caught fire. 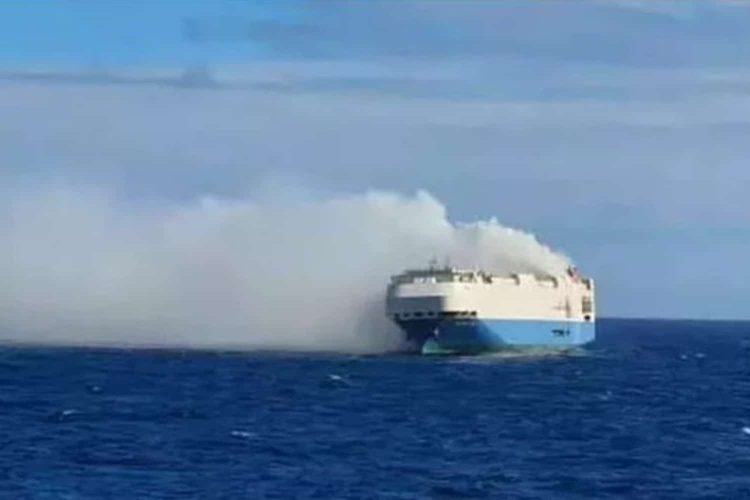 The Felicity Ace, a 200 meter Panama cargo ship, was traveling from Emden, Germany to Davisville, USA with thousands of newly manufactured luxury cars when it caught fire. Included in the list of cars were over 1000 Porches. As well as some from the Lamborghini, Bentley, Audi, and Volkswagen brands.

The ship was abandoned somewhere near the Portuguese Azores Islands when Portugal’s navy rescued all 22 crew members that were on board the vessel. On Wednesday the entire crew was taken by helicopter to Faial island on the archipelago. Luckily none were injured. Although the ship was left unmanned and adrift.

Despite the possible loss of around 1100 porches, Luke Vandezande, a spokesperson for Porsche, says, “Our immediate thoughts are of relief that the 22 crew of the merchant ship Felicity Ace are safe and well”.

Will the Ship Sink?

For now, the car carrying cargo ship still shows signs of fire, but remains floating. Although Portuguese navy spokesman Cmdr. José Sousa Luís said that the Navy is checking as to whether the ship is at risk of sinking. Never mind the financial losses, should the ship sink it will create significant ocean pollution.

In the meantime, Sousa Luís says that it is unlikely the massive vessel can be towed. Yet the ship’s owner has still been trying to source an ocean-going tug. One that can tow the cargo ship made to carry more than 18,700 tons of cargo.

Either way, the Navy has said they will be remaining close by in order to quickly detect should the ship be at risk of sinking. Hopefully, it can stay afloat and avoid the same fate as the Grande America. A cargo ship which caught fire in 2019 and sank along with over 2,000 luxury cars, including Audi and Porsche.