Second stage win for Toyota Gazoo racing at the Dakar 2023 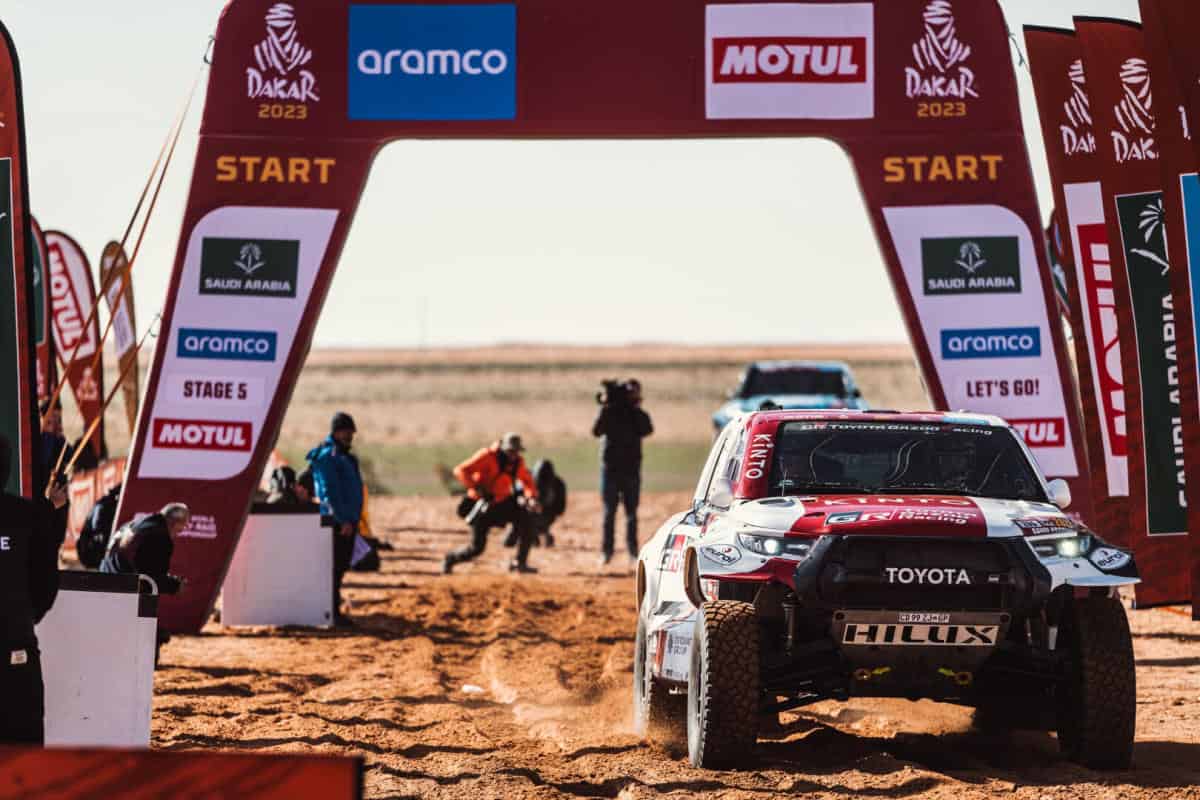 Another tough day marked Stage 5 of the 2023 Dakar Rally, which saw TOYOTA GAZOO Racing’s Nasser Al-Attiyah and co-driver Mathieu Baumel record their second stage win of the 45th edition of the race. The pair completed the 374km special stage in 4hr 13min 23sec, placing them 1min 57sec ahead of the second-placed crew. This result has cemented their position at the top of the overall standings, as they are now 22min 36sec ahead of their nearest competitors.

Nasser and Mathieu will also be campaigning their GR DKR Hilux T1+ in the FIA’s World Rally-Raid Championship (W2RC) this year, in defence of the title they won last year. As such, their performance at Dakar 2023 has a direct influence on that championship too, as the Dakar Rally is Round 1 of the 2023 season. At present, Nasser and Mathieu have earned 12 points towards the W2RC at the race thus far, leaving them three points behind their nearest rivals in the W2RC standings.

Stage 5 was a tough one for TGR’s two remaining crews. Henk Lategan and co-driver Brett Cummings posted the 6th-fastest time today, some 12min 33sec adrift of the time posted by Nasser and Mathieu. The pair described the terrain on the stage as “punishing” on both the car and the body, and they found the going tough for most of the day. They lost time when a tyre bead slipped off the rim after a hard landing into a rut early in the stage, and almost suffered a similar fate much later in the day. Luckily the tyre re-seated itself on the second hard landing, and the crew managed to complete the stage without a second tyre change. They remain in 5th place overall, 57min 58sec behind the lead.

Giniel de Villiers and co-driver Dennis Murphy also had a challenging day. The harshness of the terrain played havoc with their bodies, but they still posted the 8th-fastest time on the day, 19min 44sec behind the winners. They have retained their 7th position in the general classification, with a 1hr 7min 57sec deficit to the leaders.

Stage 6 of this year’s Dakar Rally was meant to see the bivouac shift from the city of Ha’il to Al Duwadimi but flooding in the Al Duwadimi area has forced the organisers to reroute the Dakar caravan to the Saudi capital of Riyadh instead. Stage 6 will be shortened by 100 km, and as such the competitors will have to complete a post-stage liaison of 300 km.

The organisers will determine the stages to follow based on the conditions at the time, but the rest day of the 2023 Dakar is schedule for January 9th, in a bivouac near the Saudi capital of Riyadh. The event will draw to a close on January 15th, in the Eastern city of Dammam.

Glyn Hall, TGR Dakar Team Principal: “Today saw the implementation of the FIA’s Equivalence of Technology (EOT), which is a system that is designed to balance the performance between cars that feature vastly different power technologies in the T1 category. The calculations are quite complex, but in essence all the top teams had agreed to this approach prior to the start of the race, and while we were somewhat surprised by the decision, it is in line with the rules and our prior agreement, and it will be implemented throughout the year at the FIA’s W2RC events. The EOT will be reassessed during the Rest Day. In the end, all that we can do is focus on our own race and our own results, and I extremely pleased with Nasser and Mathieu’s win today.”

Nasser Al-Attiyah: “It was a good stage for us today. Not easy at all, and really hard on the body, but despite this we managed to push, and I’m very happy to have won the stage. There’s still a long way to go, but at this point we’re happy to be in the lead. We’ll keep trying to increase our lead, of course, but for now we are content to be at the head of the field.”

Giniel de Villiers: “It was a very physical stage today, very tough on the body and especially on the neck. There were endless fields of camel grass and very tricky dunes. We were caught out a couple of times and had to slow down, before getting back on the attack. Certainly, a very tough stage today!”

Henk Lategan: “We had a good start to the stage, which was run on some sandy tracks. But then we had a problem with one of our tyres, before entering the dunes. I struggled a bit in the dunes, especially compared to some of the crews who have been doing this for many years. We took a couple of hard knocks today, but overall, I’m relieved that we got through a very tough stage.”

2023 Public Holidays: Here’s how to get the most out of your year!