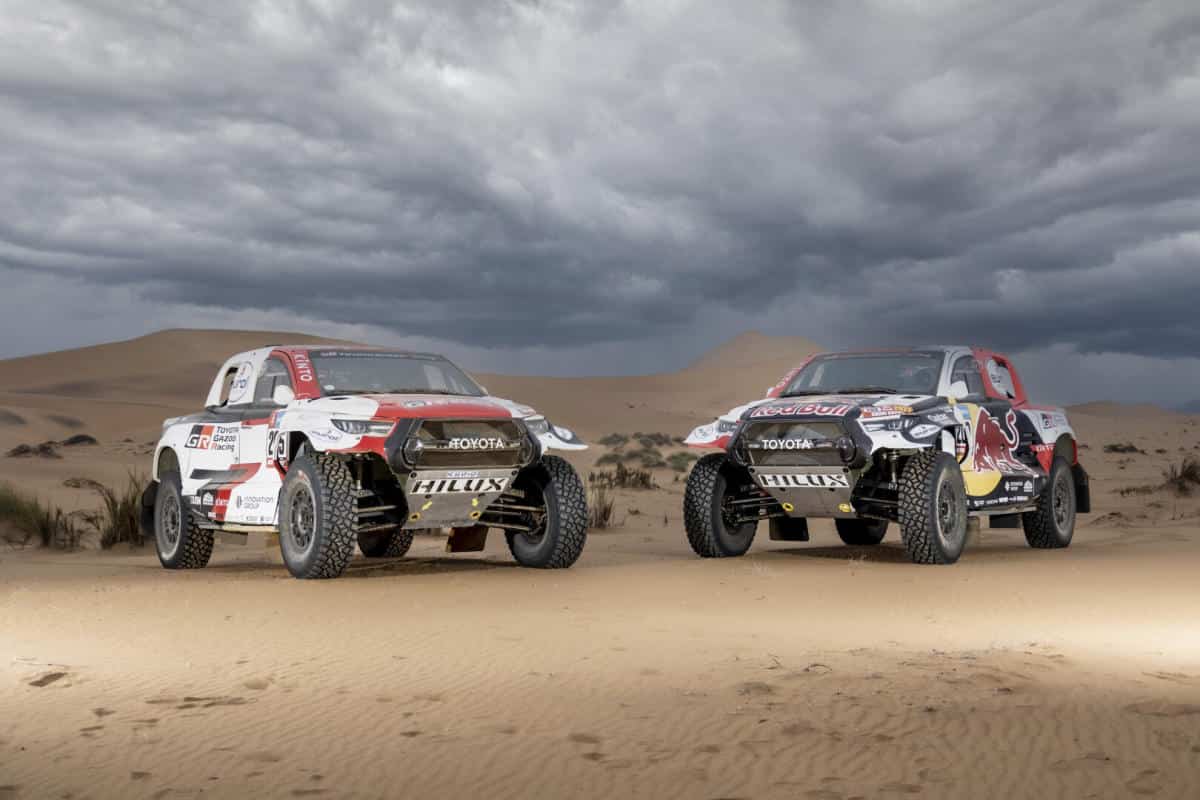 TOYOTA GAZOO Racing is set to take on the 2023 Dakar Rally with a three-car team early in January. The defending champions, Nasser Al-Attiyah and co-driver Mathieu Baumel, will return to lead the way together with newly crowned South African Rally-Raid Champion Giniel de Villiers and co-driver Dennis Murphy, as well as Henk Lategan and Brett Cummings.

This event will mark the start of the World Rally-Raid Championship (W2RC) 2023 season, with Nasser and Mathieu again taking on the world’s toughest cross-country races. The remaining crews will compete the rest of the season in the South African Rally-Raid Championship (SARRC), which also serves as a key component in the ongoing testing and development of the GR DKR Hilux T1+. In 2022, the seven-round SARRC was won by Giniel and the former champions Henk and Brett finished second in the championship considered one of the world’s toughest rally-raid series.

The tough 2022 racing season offered TGR comprehensive opportunities to improve the Dakar-winning GR DKR Hilux T1+ in terms of quality, durability and reliability. In line with Toyota’s ethos of “Making Ever-better cars”, the team capitalised on more than 25,000km of racing and testing completed by its crews in both the W2RC and SARRC. Furthermore, the crews further built on their own competencies, thanks to 130 combined days on the road, securing both the W2RC and SARRC titles for the team.

For the 2023 season, the FIA has refined its criteria aimed at balancing the performance between the Class T1+ vehicles, and their counterparts in Class T1U (ultimate). The primary focus of the updated rules is to close up the field, making competition even tougher.  For example, both the Class T1+ and T1U cars have had their peak power output reduced by 30kW. The power curves have been adjusted to blend the change proportionately, and the altitude compensation for turbo powered T1+ cars has been removed.

At the same time, TGR has been constantly upgrading the GR DKR Hilux T1+, with the aim of improving its quality, durability and reliability even further, ensuring that the car is fully prepared for the rigours of the Dakar Rally, the W2RC and the SARRC. As such, improvements have been made to the car’s differentials, suspension parts and wishbones, which have been reinforced. The single damper setup has also been optimised, as has the transmission’s shifting characteristics. Finally, the software has been tweaked to accept the latest racing fuel, and to ensure that the car conforms to the Balance of Performance requirements as set out by the FIA.

Dakar 2023 is set to start on 31 December, 2022 on the North Western coast of Saudi Arabia, before traveling inland towards the city of Ha’il. From there, the route continues in a South-easterly direction, bisecting the feared Empty Quarter, before finally swinging northwards towards the finish at Dammam, on 15 January, 2023.

Glyn Hall, TGR Dakar & SARRC Team Principal and Technical Director: “Dakar 2023 is around the corner, and we are excited to take on the world’s toughest automotive race with a three-car team in January. We’ve worked hard at refining our GR DKR Hilux T1+ over the course of the year, and we’re confident that we are well-prepared to take on the rigours of the race, as well as our competition.

Nasser Al-Attiyah: “Winning the 2022 W2RC title was my first goal, and I’m proud to say that we achieved it. Also, the car has been getting steadily better throughout the year, and with a final test in Namibia, I’m sure that we’ve locked in the best possible version of the GR DKR Hilux T1+yet. Now, all that remains is to go racing in Saudi Arabia.”

Giniel de Villiers: “This year has offered some tough challenges, especially in terms of the SARRC. With that said, we managed to prevail to win the 2022 title, and as such we’ve grown considerably as a team. The car has also matched our personal growth, and we are excited to be back at the Dakar Rally this January. Winning the SARRC title has affirmed our belief that we are in the mix for overall victory this January, and we can’t wait for the race to start.”

Henk Lategan: “Dakar 2022 offered a steep learning curve, and I’m pleased with our experience earlier this year. Now, it is time to face the challenge yet again, but this year we are considerably more experienced, and the GR DKR Hilux T1+ is better than ever. Let’s get going in Saudi Arabia!”