[WATCH]: Smiling Man Waves While Speeding Along the N1 in a Trolley

Man waves at Gauteng drivers as he speeds down the N1 in a shopping trolley while hanging onto the back of a fuel tanker. 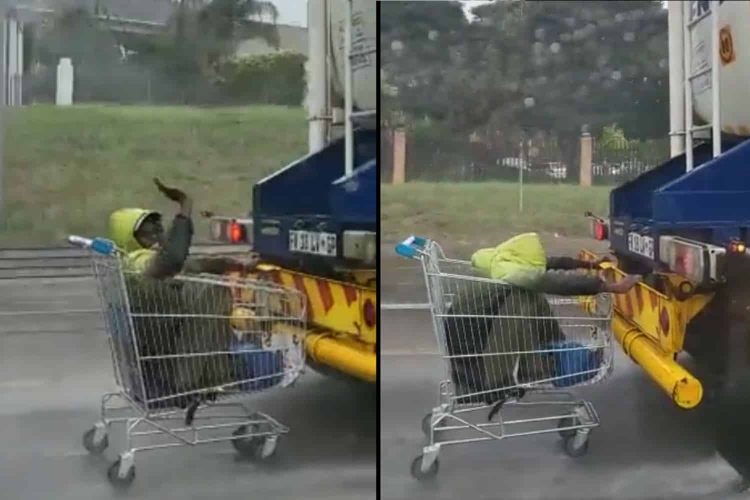 [WATCH]: Smiling Man Waves While Speeding Along the N1 in a Trolley. Images from @msiza_jv on Twitter

Twitter users have been entertained by the footage of a man speeding down the N1 in a shopping trolley. The trolley rider appears to be smiling as he holds onto the back of a truck with one hand and waves at passing drivers with the other. This, despite the possible speeds that he could have been travelling and the very wet weather evident in the videos.

The man in the trolley is wearing a yellow hoodie which fades into darker colours. The footage shows him is sitting ‘safely’ crouched in the trolley with what appears to be a shopping packet by his feet. The trolley looks as though it has retailer branding. From the video it is unclear which retailer the trolley belongs to, but judging by the footage I think it is safe to say they make pretty sturdy trolleys.

It is unclear when the footage was filmed. None the less, Gauteng traffic police spokesperson, Sello Maremane, said authorities would investigate the footage. In the videos the truck appears to be an Engen fuel tanker, for which the number plate is clear. Plus, in one of the videos, there is a clear shot of a road sign showing that the truck and the speeding trolley attached to it are travelling on the N1 towards Krugersdorp and Johannesburg.

With the heavy rains that Pretoria and surrounding areas are experiencing the South African Weather Service has released a level four weather warning. Advising the public to be cautious, especially while travelling. It also advises that all persons avoid areas with fast flowing and deep water, especially in low-lying areas.

In our team’s shoes: Alfa Romeo F1 Team ORLEN and Accelleron launch auction items for Save the Children