A grass native to Africa could transform the continent’s dairy yields. Here’s how

The cows kept by small-scale farmers in Africa are notoriously unproductive. The average dairy cow, for example, produces about 540 litres of milk per lactation. 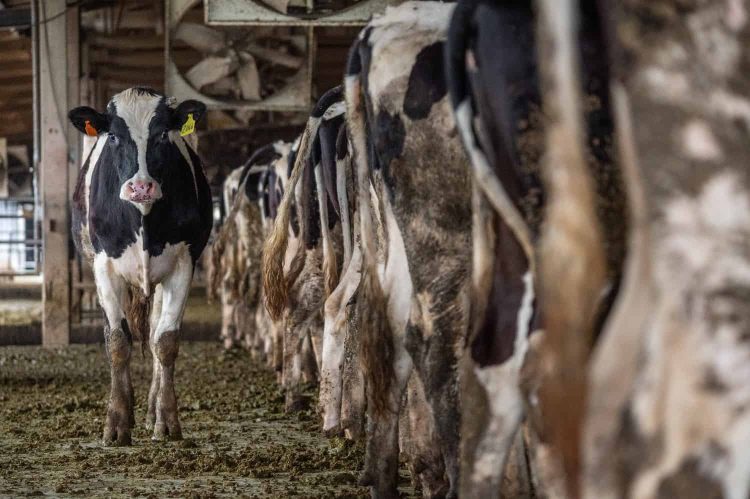 Photo by Jo-Anne McArthur on Unsplash

One of the main differences between the two animals lies in the quality of their feeds and forage. Simply put, the more nutritious cows’ diets are, the more and better quality milk they produce. And small-scale farms – of which there are about 33 million in Africa, contributing up to 70% of the continent’s food supply – usually cannot afford more nutritious feed.

Brachiaria – the genus name of Urochloa – consists of about 100 documented species of grass of which seven species used as fodder plants are of African origin. This grass may hold the key to improving milk yields from cows kept by small-scale farmers. Why is this an important goal?

First, it will help to meet rising demand for animal-sourced foods – like cow milk – as the continent becomes more urbanised and its population grows. Second, it will provide an economic boon to individual farmers and communities more broadly. Finally, there’s potential for Brachiaria itself to become a money maker. Local seed traders will benefit if the grass seed is commercialised.

Brachiaria has already proven its worth in some parts of the world. It has been instrumental to the beef industry’s success in the tropical Americas. Brazil alone now has some 99 million hectares of land dedicated to Brachiaria grass.

The seed varieties currently used in African agriculture are all imported, most from South America and South East Asia. Long distance transportation and tariffs make these seeds expensive. It would be ideal to develop a quality, climate resilient Brachiaria seed production system on the continent. But where?

We believe the answer lies in Cameroon. Farmers there have long planted Brachiaria seeds, but nobody had ever tested their quality. Our research filled this gap. Though the overall seed quality was poor, we’ve found that improved cultivation practices can address this issue. Now we’re hard at work to turn Cameroon into Africa’s Brachiaria seed hub.

Brachiaria’s forage quality was recognised by scientists in the 1950s. It has a high biomass yield potential and is adaptable to low-fertility soil. South American farmers, especially in Brazil, started using Brachiaria on a large-scale in the early 1970s and it is recognised as being key to the region’s booming beef industry.

In Africa, however, interest in the grass grew more slowly. It was not until the early 2000s, when the continent began to feel the effects of population growth and urbanisation that higher demand for animal-sourced foods piqued renewed interest in ways to improve agricultural yields.

As a plant scientist based at the International Livestock Research Institute, I have researched Brachiaria grass since 2013. Through various partnerships, colleagues and I have worked on a climate-smart Brachiaria programme to test the varieties already developed in Australia and South America in various African contexts. They performed well independently, but the next step was to integrate them into the mixed crop-livestock systems typical of the continent.

Farmers responded enthusiastically to the grass: it significantly increased milk production by up to 40% and caused substantial body weight gain in livestock, by as much as 50% in heifers. Its popularity grew as major journals and media outlets publicised its benefits. However, the seeds that made all this research possible were still unavailable on the continent. We had to import them, an arduous and costly process because of regulations and distance. So we knew that, going forward, we had to look at local seed production.

It was also crucial to find the best country for the task at hand. While our work in Kenya and Rwanda was promising, it wasn’t as successful as we would have hoped, possibly due to these countries’ proximity to the equator; the fact that night and day are of equal length affected various stages of seed development in species that favour longer days.

During a visit to Cameroon, I noted that farmers had been growing Brachiaria grass for over 50 years and simultaneously producing the seed for domestic uses.

They also sell surplus seed to neighbours, and seed traders from the Central African Republic and Nigeria. However, the quality of seeds produced in Cameroon was not established until our study.

There are ten regions in Cameroon; Brachiaria grass is commonly grown in five. Our team collected seeds from these five regions to determine their quality: trueness to variety, germination percentage, purity, vigour and appearance. The quality was generally too low to meet international standards, but with improved cultivation practices this hurdle can be overcome.

We are currently engaged in activities that would make Cameroon Africa’s Brachiaria seed production hub. Achieving this would significantly increase seed availability to farmers, reduce the cost of the seeds and facilitate the scaling of Brachiaria grass production across the continent.

To this end, my research team at International Livestock Research Institute (ILRI) and researchers from the Institute for Agricultural Research and Development in Cameroon have been working to document the quality of Brachiaria seeds produced in the country’s different regions of Cameroon. We’re also fine-tuning agronomic practices to improve seed quality, as well as training local farmers on improved agricultural practices for the production of quality Brachiaria seeds.

We hope that this partnership between the two institutes will develop Cameroon into the continent’s Brachiaria seed production hub in the next three to five years. This will have numerous economic benefits and make quality seeds available in the African continent at a much lower price.

The Information Regulator Could Enforce Transparency