Protestors gather outside the Thokoza SASSA branch, claiming that officials have been insisting on bribes starting at R50. 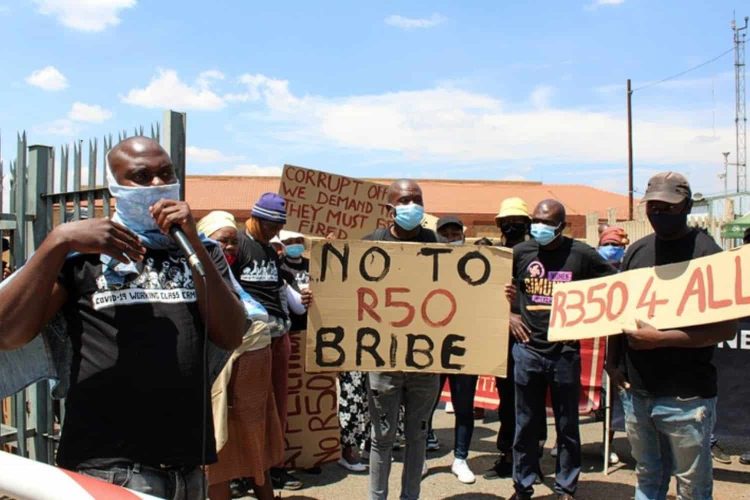 Members of the public have accused SASSA officials, specifically at the Thokoza branch, of demanding bribes before assisting members of the public. SASSA has until Wednesday to respond to the memorandum submitted at the Pretoria head office. Otherwise, General Moyo from #PayTheGrants says, ” …they leave us with no option but to mobilise nationwide “

About 40 people picketed outside the South African Social Security Agency (SASSA) office in Thokoza, Johannesburg on Monday. They have accused officials there of accepting bribes in exchange for assistance at this office. The group also demanded that the Covid-19 Social Relief of Distress Grant application process be improved.

The picket was organised by the Covid-19 Working Class Campaign and supported by the #PayTheGrants campaign.

A Thokoza resident, who asked to not be named, told GroundUp that SASSA officials in Thokoza were asking for a minimum of R50 before assisting applicants and beneficiaries.

Nthabiseng Tshenase, office manager at SASSA in Thokoza denied the allegation and said it was the first time she had heard about officials requesting bribes. Asked what measures will be put in place to address this issue, she said, “We are going to check with our officials. For now, I won’t know for sure who is asking for bribes unless people from the community come forward to report them.”

In a statement on 30 September, SASSA said of the 8.3 million R350 grant applicants, more than 5.6 million people were paid.

The campaign’s Edgar Mokgola said, “We want SASSA officials to come into our communities and see how this process is failing people. There are millions of people who have not received the grant because they have been excluded by the application system.”

Nonhlanhla Nhlapo of the Covid-19 Working Class Campaign read the memorandum before giving it to Tshenase to sign. Nhlapho asked that SASSA respond within seven days.

After signing the memorandum Tshenase told the group, “We have heard your grievances and they seem to be more related to the Covid-19 R350 grant. That is a national issue and we will escalate it to the relevant officials.”

General Moyo from #PayTheGrants said they have already submitted a memorandum to the SASSA head office in Pretoria, for which they are awaiting a response.

“We have given SASSA until Wednesday to respond. Should they fail, they leave us with no option but to mobilise nationwide until they respond to our demands,” he said.