Artisan robots with AI smarts will juggle tasks, choose tools, mix and match recipes and even order materials – all without human help

Custom fabrication – making components on demand – is often essential, sometimes to conform to a patient’s specific anatomy or to replace aircraft landing gear that was forged and is no longer being made. 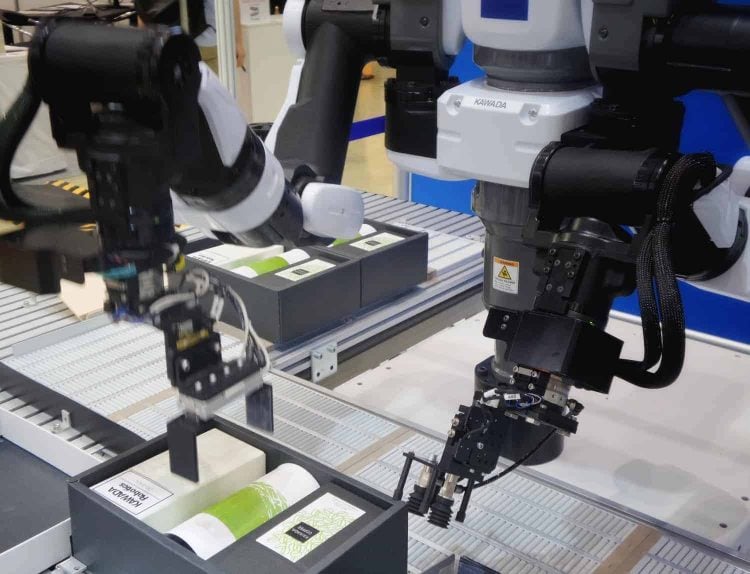 Photo by Possessed Photography on Unsplash

Failure of a machine in a factory can shut it down. Lost production can cost millions of dollars per day. Component failures can devastate factories, power plants and battlefield equipment.

To return to operation, skilled technicians use all the tools in their kit – machining, bending, welding and surface treating, making just the right part as quickly and as accurately as possible. But there’s a declining number of technicians with the right skills, and the quality of things made by hand is subject to the skills and mood of the artisan on the day the part is made.

Both problems could soon be solved by artificially intelligent robotic technicians. These systems can take measurements; shape, cut or weld parts using varied tools; pass parts to specialized equipment; and even purchase needed materials – all without human intervention. Known as hybrid autonomous manufacturing, this process involves automated systems that seamlessly use multiple tools and techniques to build high-quality components where and when they are needed.

I am a professor of metallurgical engineering. My colleagues and I design the recipes to make materials and components with just the right internal structure to create properties like strength and fracture resistance. With a network of colleagues at Ohio State and other universities, I have been developing a plan to give birth to these autonomous artisans.

How things are made

Components are either mass-produced or custom-made.

Most things people touch daily have been mass-produced. Quality is assured by using well-honed processes based on testing and monitoring large numbers of parts and assuring the process is done the same way every time.

Custom fabrication – making components on demand – is often essential, sometimes to conform to a patient’s specific anatomy or to replace aircraft landing gear that was forged and is no longer being made. Processes for making metallic parts – material removal, deposition, deformation, transformation, inspection – can all be done with small tools, with incremental actions rather than the kind of bulk processes, usually with big tools and dies, used in mass production.

Automation has long been a part of mass production, which includes sophisticated robots that handle parts and weld on automobile assembly lines. Additive manufacturing, often referred to as 3D printing, is increasingly being used with a variety of materials to make components.

Now in development are robotic blacksmiths – robots that can hammer metallic parts into shape instead of cutting, building up or molding them.

Automated customization – not an oxymoron

To automate custom fabrication, my colleagues and I are developing an automated suite of tools that can carry out all the steps for making a wide range of components, using multiple processes without human intervention. Sensors will also be central to hybrid autonomous manufacturing to control the processes and maintain and assure quality.

Such autonomous manufacturing systems will make the myriad decisions needed to create a component of the right strength, size and surface finish. Artificial intelligence will be required to handle the enormous number of choices of materials, machine settings and process sequences. Rather than finding a mass production recipe and never deviating, these autonomous manufacturing systems will choose from a very large set of possible recipes to create parts, and will have the intelligence to assure that the chosen path produces components with the appropriate material properties.

Robots could either position small tools on manufactured component or transfer the component from one piece of equipment to another. A fully autonomous system could manufacture a wide range of products with a versatile set of tools. The systems could source materials and possibly even send work out to specialized cutting and deformation tools, just like a human artisan.

The production rate of such systems would not rival those of mass production, but because robots can work continuously they can be more productive than human technicians are. Data from sensors provide a digital record of all the steps and processes with critical temperatures, machine settings and even images. This record can assure quality by, for example, making sure the material was deformed the right amount and cracks were not produced during the process and covered up.

Manufacturing at or near the operating room is one example of a process that can be enabled with hybrid autonomous manufacturing. Often when patients with bone fractures undergo trauma surgery, metallic plates of varied shapes are required to hold bones together for healing. These are often created in the operating room, where the surgeon bends plates to fit the patient, sometimes using a 3D-printed model created from medical images of the patient as a form to bend the metal against.

Bending by hand is slow and imprecise, and stressing the plate in the wrong place can cause it to fracture. A robotic technician could cut and bend and finish a plate before surgery. Patients do better and save money if they spend less time in the hospital.

The road to robotic artisans

Numerous companies are now showing the way forward in autonomous manufacturing, including three venture-funded startups. FormLogic is developing automated high-quality machine shops. Path Robotics is putting the skills of a welder into a robot. And Machina Labs is out to create robotic blacksmiths. Other companies are developing systems to automate design and logistics.

Hybridization – the ability to carry out different tasks in different ways with multiple tools – is the next step. The key pieces of hybrid autonomous manufacturing exist now, and fully autonomous systems could be common in a decade. Companies adopting this approach to custom fabrication will need to draw on a new generation of students with the skills to combine these technologies.

Millions are rejecting one of humanity’s best weapons for saving lives: Vaccines