While aviation accounts for 2.4% of all emissions from fossil fuel use globally, two-thirds of the sector’s warming effect depends on something other than its CO₂ emissions. 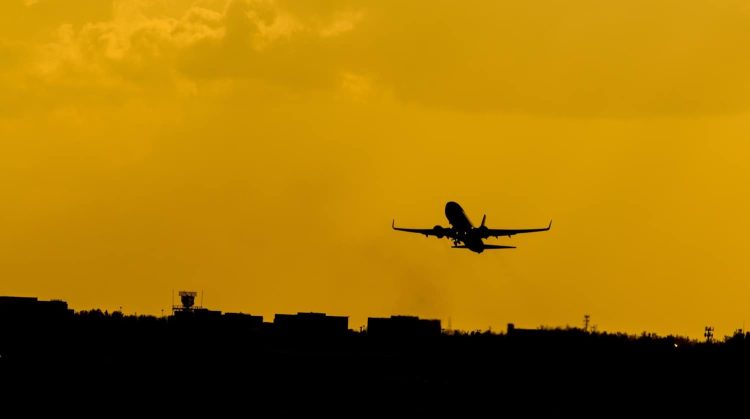 Photo by Dominik Scythe on Unsplash

While aviation accounts for 2.4% of all emissions from fossil fuel use globally, two-thirds of the sector’s warming effect depends on something other than its CO₂ emissions. And one of the most significant ways aviation contributes to global warming is through the clouds aeroplanes create in the upper atmosphere.

But, in a new study, researchers have shown that alternative fuels to the kerosene that aeroplanes typically burn can help.

At cruising altitudes where the atmosphere is cold and humid enough, contrails (short for condensation trails) form in the wake of aircraft. These are clouds made of ice crystals that are initially produced from the plane engine’s soot and water emissions – you’ll probably have seen them as white, puffy streaks in the sky on a clear day. When the atmosphere is especially cold and humid at high altitudes, these line-shaped contrails can last for many hours and spread to form vast webs of cirrus clouds, which look like white wisps of hair.

These clouds reflect the sun’s radiation back to space, cooling the atmosphere, but they can also trap infrared radiation reflected from the Earth. This process ultimately warms the atmosphere, as the warming effect exceeds the cooling. This is calculated to be aviation’s largest current warming effect – nearly double that from historic CO₂ emissions.

Reducing aviation’s climate impacts from contrails will depend on minimising soot particles from aeroplane exhausts. Aircraft exhaust plumes used to be smoky, as they contained a lot of soot. Modern engines are designed to reduce the heaviness of soot emissions, but the size and number of ice crystals that form depends on the large number soot of particles. There’s only so much more that can be achieved by cleaning aeroplane exhausts – future efforts must focus on the fuel itself.

Impurities such as napthalene, which are naturally present in aircraft fossil fuels like kerosene, are called aromatic compounds. These are carbon ring-shaped chemical structures that form the building blocks of soot particles. Biofuels made from crops and waste vegetable oils, and synthetic fuels made using renewable electricity, hydrogen and CO₂, are designed to reduce the carbon footprint of flying.

There are no aromatic impurities in these fuels, meaning fewer soot particles are generated when they’re burned. In the new study, the researchers found that they also generate fewer (but larger) ice crystals in the atmosphere during flight. This, in turn, makes the contrails and the cirrus clouds they form warm the Earth less.

The future of flying

Currently, aeroplanes can only fuel up with kerosene or kerosene-biofuel blends. The authors of the new paper found that blends of fuels with low aromatic impurities cut ice crystal formation by between 50 and 70%. In another paper, researchers predicted that would equate to a reduction in the overall warming effect of contrails by approximately 20%-50%. Flights are likely to be permitted to run on pure biofuels at some point in the future, so the potential reduction in the warming caused by aviation could be even greater.

Other solutions, such as electric flight, are only likely to be possible for very short routes. Even hydrogen-fuelled aircraft may only be developed to manage medium distances. Both technologies will take more than a decade to mature before they can be introduced into the global aircraft fleet. Long-haul aviation is likely to depend on liquid kerosene-type fuels for the foreseeable future.

Another option is for pilots to avoid parts of the atmosphere where contrails are more likely to form. On a flight-by-flight basis though, navigating to avoid these regions would almost certainly increase the flight’s CO₂ emissions. Weather models also cannot predict the areas where contrails will form with enough accuracy.

Of course, the financial costs of developing and distributing biofuels and synthetic fuels at sufficient scale will probably be large, and may increase the costs of flying. In all likelihood, governments will need to mandate a phase-out of fossil-based kerosene and provide large incentives for airlines to switch. But time is running short to decarbonise flying, and this is an effective option that airlines can develop straight away to reduce the industry’s overall climate impact.

Small towns are collapsing across South Africa. How it’s starting to affect farming