Crypto Banter In The Game 13 January 2022 is jam packed full of the latest in the NFT and Play 2 Earn market. Don't miss out on this episode.

by Jamie Rautenbach
in News 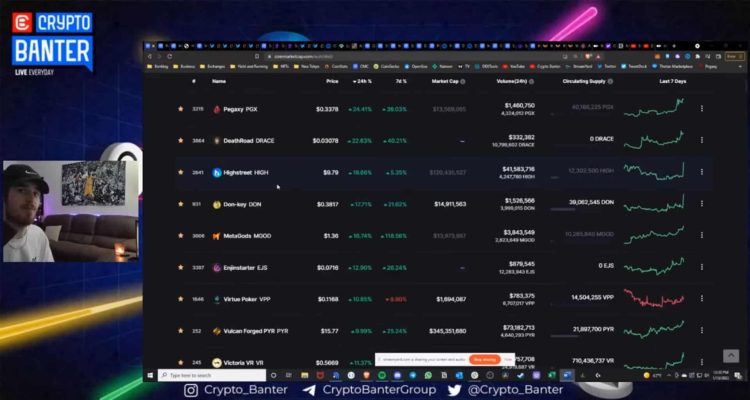 Hustle brings us yet another information packed in the game show today in which he highlights those tokens that he believes will bring those of us willing to invest the maximum gains this coming year. Watch the last in the game show to stay fully informed on the latest in NFT and play 2 earn gaming.

Coins Covered On In The Game

Since yesterday we saw a 26% growth in stock price with user transacting upward of $24Mil in the last 24 hours. Still very underrated. One the the very best renting system on the blockchain right now. 3D version coming out soon which should increase adoption significantly. Think of it as a under rated version of DeRace.

Every day is highlighted by more developments in this project. Their own blockchain coming soon with testnet set to launch the 31st of this month. Since they opened the exchanges again there has been tremendous growth in the Vulvanverse economy.

Building something with great potential in the future. A possible (strong) NFT competitor to Opensea with low gas and high transaction speeds. Not only that but they are also building the online, multiplayer social deduction game called Imposters, comparable to the hit “Among Us“, which should have a solid following.

Fantasy action RPG for both Android and iOs. Powered by Immutable X with 150K pre-registered players build by Stepico and backed by some super names in the industry. Very bullish in Hustles opinion.

Potentially one of the biggest game launches on Solana this year. Solid team and great backing. Think turn based Fifa, which should be absolutely huge.

A combat style game with a open world social experience. Very good looking and their NFT’s did really well on the sale. Once this hits the major exchanges we can expect a good upward momentum.

Third person shooter, one of the hottest on Solana. Excellent game. Now is a good point to enter the stock.

In Hustles top 5 for the rebound in crypto games. Hitting almost $10 during the bull pump it has great potential for future pumps. Currently with over 7K active users every day.

In 5 days the 2d version of this game is being released in Q1 2022 with the token hitting $6 during the peak of the bull run. Backed by super names like Animoca Brands and Illuvium. A cross ip 2d survival game along with a metaverse 3d game in which you can bring in characters from other universes. Easy to play with a low entry cost. Hustle believes this will be big hit once launched.

Not yet released. Embersword is a free to play MMO openworld RPG with a player driven community. The game is focused on play to earn and not pay to earn in ways such as making your weapons NFT mainly skinned based so no person can just drop a bag of money and now they can overpower those without. You also can’t purchase the token and are forced to play the game to earn it which makes it very player centric. Partnered now with Immutable X which is a very great team up.