Desperate residents, most of which pensioners, build their own clinic. All the Department of Health has to do is send the promised staff. 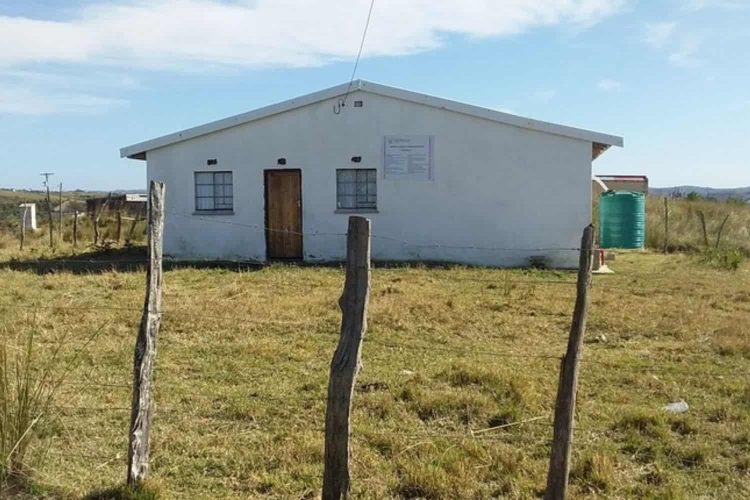 Residents from Lurwayizo village and surrounding areas, most of which are pensioners, joined forces to build their own clinic. Using their own materials and social grant money. Only to sit waiting for nurses promised by the Department of Health.

It’s Thursday morning at the Lurwayiso clinic and about 30 patients carrying their clinic cards are waiting outside. Some of the patients are inside the clinic already, also waiting. None of them will be seen by nurses today.

Fed-up with expensive trips to the clinic at Mpozolo 15km away, pensioners from Lurwayizo village in Willowvale in the Eastern Cape built their own clinic. But there are no nurses, because the provincial Department of Health has failed to send the nurses which the MEC promised.

Thembeka Ndevu, who is a cleaner, is registering patients on a list. She was an unpaid volunteer from when the clinic was opened in 2019 until recently, when residents in each village started collecting sums of R10 to R20 to pay her. Last month she was paid R1,000. Because the clinic only takes 50 patients a day, she says, every morning she registers the first 50 people to arrive at the clinic. “Once the 50 are registered, the rest return home and come back when the clinic opens again,” she says

But for the last two months, Ndevu has been registering patients for nothing, since there have been no nurses at the clinic.

“We wait together until lunch time before I let them go home,” she says.

In early 2018 they started by fencing the yard. Each resident brought a pole and they used fencing from their farms. Then they collected donations, from R60 to R150 per household. We were shown a list of about 2,000 names of people who had contributed. A local businessman, Benjamin von Meyer, had helped and had encouraged his friends to donate. Construction started in January 2019.

Pensioners in these villages say this is the fourth clinic they have built. The first was built around 2014 with sticks and mud. Heavy rains destroyed that. Residents re-built, but the second clinic also did not survive. A third clinic was blown away by heavy winds around 2018, and it was then that pensioners took a decision to raise funds for a proper building.

Kidwell Tomtala, 60, who is a volunteer caretaker at the clinic, says since 2013 villagers had been begging the health department and provincial government to build them a clinic.

“I have written a number of letters to the department and they kept on promising to build us a clinic but that never happened,” said Tomtala.

“We used our social grant money to build this clinic,” he said.

When the then MEC for Health Helen Sauls-August was on a visit to a nearby village in February 2019, residents of Lurwayizo went to meet her, said Tomtala.

“We went there to inform the government what we have done. At the time the clinic needed ceiling, tubing and flooring. We told them we are not finished yet, but what we want is for the health department to organise nurses for this clinic. They were so excited, on that same day they came here to check the clinic. A few days later they came back with their big cars, with food and cakes to officially open this clinic,” said Tomtala.

He said Sauls-August had promised that the department would take over and finish what was left of the building and would send nurses.

“She said nurses would come on Tuesdays and Thursdays. And once the number of attendants increased to more than 50 a day, the clinic would be open every day,” said Tomtala.

Resident Welton Nguqu, 71, said the health department had failed them from the start. “When the MEC was here cutting cakes she promised to tile this clinic. We are still waiting. This flooring you see, we bought it ourselves,” said Nguqu.

“Yes, they installed electricity but as you can see they did not finish, these are some of the globes they were supposed to install: they’ve been here for a year now.”

“The only thing they gave us is this old water tank you see outside,” said Nguqu.

“We were told that nurses will be here twice a week but that never happened. Sometimes they would come once a week or skip a week, and we did not complain. The MEC said once the attendance increased to more than 50 a day they would add nurses and days, but here we are turned away, and we are not complaining. We wait until they open again. But this is too much. There’s no communication. Our calls are being ignored now,” he said.

Ndevu said when she called the nurses in Mpozolo to find out if they were coming they usually told her that there was no car to pick them up.

Residents paid for the electricity installation to be completed and for the tiling. The ceilings are still not complete. There are two consulting rooms, a pharmacy, a kitchen, counselling room and waiting room – built at a cost of R320,000 according to the residents.

When GroundUp approached Sauls-August, who is now Speaker of the Eastern Cape legislature, for comment, her spokesperson Lwandile Sicetshwa said since she was no longer MEC there would be no comment. Amathole Health District Manager Sindiswa Gede blamed bad roads that are inaccessible because of rain, and recent protests, for the failure to send nurses. Head of department Dr Rolene Wagner said due to Covid-19 and the roll-out of the vaccination programme the department faced challenges bringing nurses from Mpozolo clinic to Lurwayizo.

Nowezile Ndlumbini from Mendwana village is 83 years old. As one of the pensioners, she said her reason for contributing to the building of the clinic was to prevent people dying before they could get to help.

“Here there are no ambulances. If we are sick we are forced to hire a car and to go to Madwaleni hospital in Elliotdale and it costs R1,200 to R1,600 – that is a single [way]. The car will leave you there,” said Ndlumbini. She said though the Lurwayizo clinic was only 2km from her house, she could not walk and had to hire a car for R50. But to go to Mpozolo clinic would cost her R500, she said. “I’m old, I have chronic illness and if I don’t have money I cannot collect my medication.”

“With this clinic we were trying to cut costs, but government is not helping us. Here not so long ago a pregnant girl got sick and we could not find a car in time: she passed away. A young man was stabbed and he died before he reached the hospital,” said Ndlumbini.

“We buried three if not four women in this village who died giving birth at home.”

“Our government is failing us after we have spent our money hoping that they will help us but no, we continue suffering,” she said.

When we visited the Mpozolo clinic in the early afternoon, people, some of them from Lurwayiso, were still queuing outside. Some said they had been there since 7am. Most patients were elderly people visiting the clinic for their second jab of the Pfizer Covid-19 vaccination.

The clinic is in an old building close to the bush, 3km away from a bus stop. Residents say the building used to be a shop in the early 1960s and was donated by the owner. The only thing built by government in this clinic is a guard room, they say.

The clinic operates from 9am till 4:30pm but most days nurses work overtime.

Sekelwa Matoti from Lurwayizo village, who was queuing, said she would have to leave before being attended to in order to catch a bus. If she missed the bus she would have to walk 15 km carrying her six-month-old daughter.

The young mother said she had missed a day at school to take her baby to a clinic for immunisation. She said she would return at month end when she has money. “I can’t afford to miss another day at school,” she said.

Mziwamadoda Xhungu, 72, told GroundUp that he would walk 4km home to Phesheya koMbhashe after being vaccinated. “That is why most people are not vaccinating. They say this vaccine makes you dizzy sometimes. Now imagine having to walk a distance. I only came because my neighbour insisted that we come together,” he said.

Patients in the queue said the department had been promising to build a new clinic and land had been found next to Mpozolo high school.

But Gede said neither a new clinic nor renovations to the Mpozolo clinic was in the budget for this or the next financial year. She acknowledged that land had been identified but said the department did not have funds to build a clinic.

Wagner said the department would do its best to accommodate Mpozolo clinic “within the available funding envelopes”.

“We recognise that this matter is important and urgent so we are working with the Department of Public Works to access funding specifically to address the infrastructure backlogs related to our clinics and hospitals,” said Wagner.

EFF puts a stop to fake news ahead of LGE2021