NUMSA workers say they will not return to work until their wage demands are met. 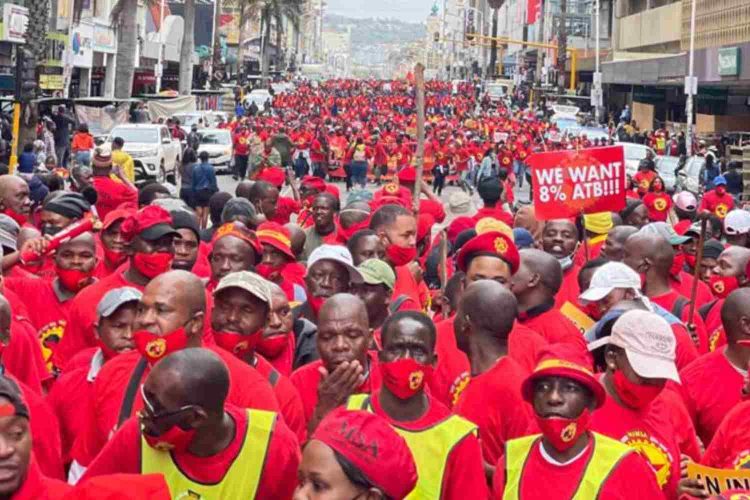 The NUMSA strike has spread out to many cities across the country and warnings have rung off about the impact this demonstration may have on the steel industry.

In one of the biggest turnouts in recent history, more than 430 000 workers from steel and engineering companies around the country downed tools on Tuesday.

According to a memorandum of demands that was handed over to representatives outside the National Bargaining Council in Marshalltown, Johannesburg, disgruntled metalworkers are demanding a wage increase of 8% are talks broke down recently.

“All our members are fed up with the fact that the employers are refusing to give us a meaningful increase we are demanding an 8% increase,” NUMSA spokesperson, Phakamile Hlubi-Majola said.

The trade union has categorically turned down a 4.4% counteroffer and made it abundantly clear that no worker will return to their respective post until employers return with the wage increase of their asking.

Protest action has broken out in several locations, including Johannesburg, Phoenix (KZN), Germiston.

In Phoenix, a group of protesters was seen vandalising infrastructure of a property in an industrial park. However, at this time, it’s unclear if this incident is linked to the NUMSA strike.

Here are more video clips of the nationwide protest action:

Workers affiliated to #NUMSA have arrived at the Bargaining Council. Hundreds of workers in the steel and engineering sector have gone on a protected strike. Union is are demanding 8% wage increase. #eNCA pic.twitter.com/JoCYaUOSO2

NUMSA's metal and engineering members wage strike is well underway in Durban. Workers have vowed to continue with their strike until their 8% wage demands are met. @Karinda_J speaks to one of the workers.#Newzroom405 pic.twitter.com/wW4VUIe0Op