The mega blitz inspections in Gauteng have so far proven that a number of employers within the targeted sectors are continuing to undermine the South African labour legislation.

by Department of Employment and Labour
in News 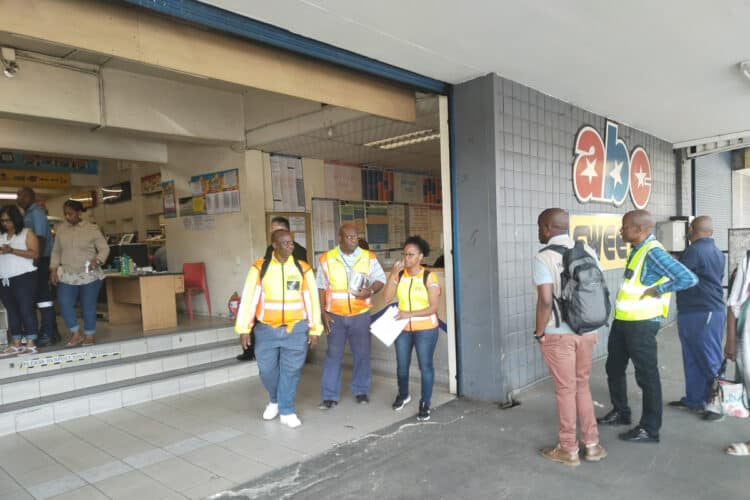 The Department of Employment and Labour’s Inspection and Enforcement (IES) unit inspectors have completely closed a wholesale and retail facility for operation in the Pretoria CBD during today’s (28 September 2022) joint Departmental Mega Blitz inspections.

The ABC Sweets wholesale and retail facility located on the city’s downtown corner of Edmund Street and Du Toit Street, is found to be non-compliant with the Occupational Health Safety (OHS) Act 85 of 1993 Section 30 (3) (c).

The notice will remain in effect until the Fire Department issues the company with a compliance certificate and then the Department of Employment and Labour can revoke the prohibition notice.

The week-long inspections in the Gauteng Province are targeting the Wholesale and Retail and Hospitality sectors to verify their level of compliance with labour legislations such as the Occupational Health and Safety Act (OHS), Basic Conditions of Employment Act (BCEA), Sectoral Determination, the National Minimum Wage (NMW) Act, Unemployment Insurance Act, and the Compensation for Occupational Injuries and Diseases Act.

The mega blitz inspections in Gauteng have so far proven that a number of employers within the targeted sectors are continuing to undermine the South African labour legislation.

The inspection officials have been leaving no stone unturned, and as a result, a number of illegal employees and their employers have been so far arrested and a number of the targeted sector companies have been found to be contravening and neglecting a number of other various OHS regulations, BCEA and the Unemployment Insurance Act among others.

The joint inspection operation officials, also consisting of the IES inspectors of the National Roving Team (Employment and Labour’s inspectors with high expertise from across different provincial offices of the Department), also conducted inspections on businesses around the Silverton and Kempton Park areas.

Issued by: Department of Employment and Labour