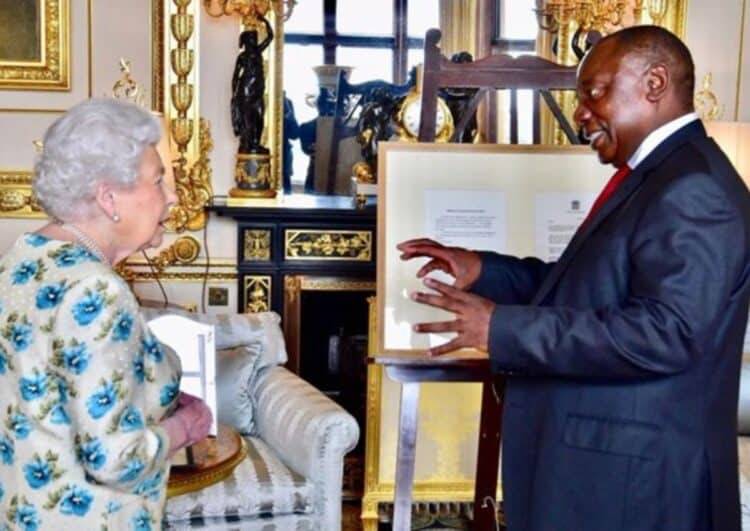 President Cyril Ramaphosa has on behalf of the government and the people of South Africa, expressed his heartfelt condolences to King Charles III on the passing of Queen Elizabeth II.

The queen died on Thursday aged 96. She was the longest reigning monarch in the United Kingdom.

“Her majesty was nan extraordinary and world-renowned public figure who lived a remarkable life. Her life and legacy will be fondly remembered by many around the world. The Queen’s commitment and dedication during her 70 years on the throne remains a noble and virtuous example to the entire world,” said Ramaphosa.

Ramaphosa said he met the queen at the last Commonwealth meeting held in London in 2018 where they spent time looking at letters written by former president Nelson Mandela to the queen.

In a statement sent late on Thursday evening, Prince Mangosuthu Buthelezi, the traditional prime minister of the Zulu nation, on behalf of King Misuzulu KaZwelithini and the Zulu royal family, said may God comfort the British people.

“On Behalf of his Majesty King Misuzulu kaZelithini and the Zulu Royal Family, as well as on my own behalf as traditional as traditional Prime Minister to the Zulu Monarch and nation, I extend our deepest condolences to the House of Windsor in this tragic hour as we mourn the passing of Her Majesty Queen Elizabeth II.

“Our prayers are with the Royal Family, and with the Prime Minister Liz Truss as she leads a nation in mourning. May God comfort the people of the United Kingdom, and all those around the world who felt such great esteem and affection for Her Majesty the Queen.”

“A matriarch has passed on and the sound of God Save the Queen has fallen silent. We salute her in death and pass our condolences to the British nation on their sad loss,” Mandela said.

Mandela said despite the colonial legacy, the queen reached out to Nelson Mandela during the years of his presidency and they developed a friendship for as long as they lived.

police officer killed, three others wounded and disarmed during robbery at a filling station in Tembisa