Tension fueled protests this morning outside of Hoërskool Jan Viljoen as parents, pupils and even political parties had to be dispersed by SAPS. 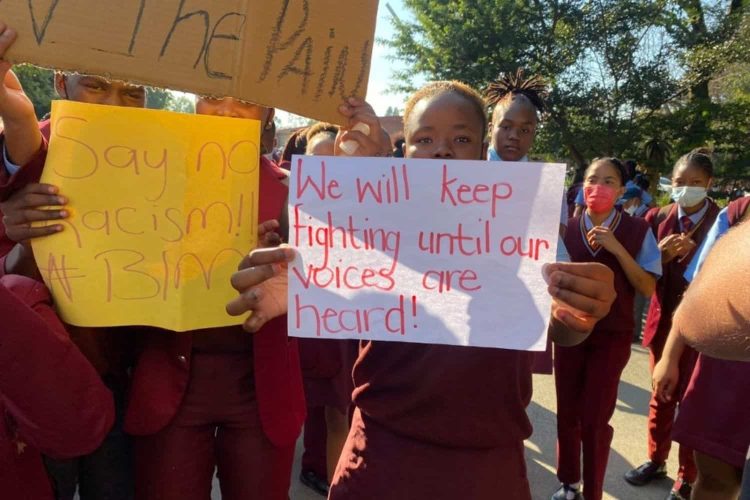 After a fight between pupils broke out on Friday due to racial claims, Gauteng Educations MEC Panyaza Lesufi visited Hoërskool Jan Viljoen in Randfontein on Monday morning.

Parents started the protest due to racist children “terrorising” their own

Lesufi was met by a group of parents who were protesting outside the school. According to the parents, there is a group of white pupils at the school who are “terrorising” black children.

“The children have been complaining about racist remarks by white children, they literally admit that they are racist, it has been happening for four years now. It’s like a time bomb that was waiting to explode and it exploded on Friday,” one of the parents told Jacaranda News.

#HoërskoolJanViljoen This parent says there is a group of white kids at this school who admit to being racist and terrorise black kids. She says it’s been happening for four years now pic.twitter.com/8uZCs6VDqj

As the black and coloured pupils inside the school also started protesting, one pupil explained how tired they are to “bear the brunt of racist behaviour”.

“We can’t do this anymore, we can’t fight for the same thing that our parents fought for, we are tired,” she said.

It got to a point where private security came out to monitor the situation.

#HoërskoolJanViljoen Inside the school black and coloured kids have started their own protest. There is private security monitoring pic.twitter.com/sEBoCFKUIL

From there the situation only got worse as pupils from a different school – Westonaria High School – came to join in the protest.

And according to reports, political parties such as the EFF and the ANC arrived on the scene. As tensions grew, AfriForum also arrived and SAPS were contacted and had to use stun grenades to disperse the crowd.

Despite attempting to talk directly to the school, Hoërskool Jan Viljoen has denied speaking to any media. Instead, they have released a statement on their Facebook page.

“The senior management team and school governing body (SGB) deplore the behaviour of individuals involved in the incident at school on Friday. The school and SGB have already started to investigate the incident and will continue to do so.

“We want to assure you that the guilty parties will be published in terms of the SA Schools Act and the code of conduct of the school,” the statement read.