After a few kisses and cuddles during a night out, Dua Lipa and Trevor Noah sparked dating rumors. Here’s what we know. 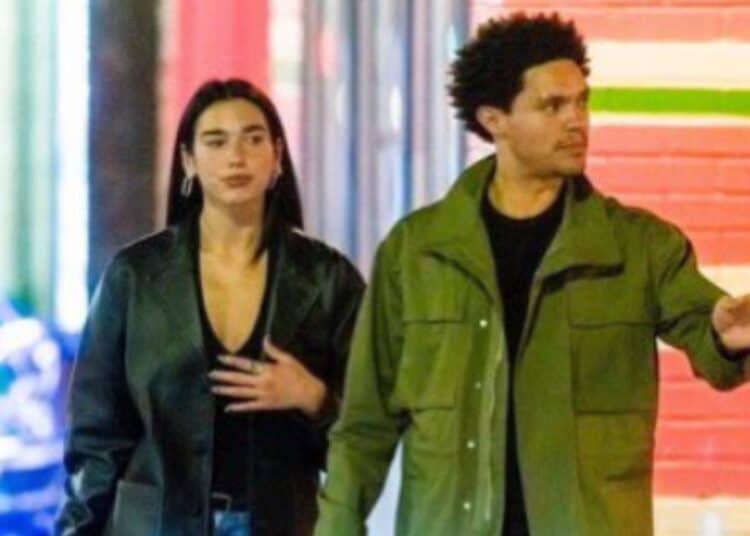 Dua Lipa and Trevor Noah might be embarking on a new relationship after the pair were spotted for a night out in New York City.

Comedian and Dua Lipa step out in New York

Right now, representatives for Trevor Noah and Dua Lipa have not responded for comment on the current rumors. So the current story remains just that, rumors.

However, Page Six currently shares that the couple was spotted having dinner at a restaurant in New York City called Miss Lily’s. In images obtained by the Daily Mail, Dua Lipa and Noah were dining close to one another at the restaurant.

Upon leaving the restaurant, the pair were spotted stopping for a kiss and a hug before exiting. While the pair have not publicly come out as a couple, their recent date showed all there is to know.

Thus far, both Dua Lipa and Trevor Noah have come out of relationships this year. Back in May, the comedian and his girlfriend Minka Kelly went their separate ways. After being in a relationship for two years. The couple had also been living together since 2020.

As for Dua Lipa, the Physical singer previously dated Anwar Hadid, who is the younger brother of Gigi and Bella Hadid. The couple previously split with a source claiming that the couple was dating a break in their relationship. However, the couple has not publicly rekindled their romance since.

Trevor Noah announces his departure from The Daily Show

More recently though, Trevor Noah announced his exit from The Daily Show. the announcement comes seven years after the comedian first took on the role from fellow comedian Jon Steward in 2015.

The Daily Show host explained that he aims to explore many other things in life and has decided that his time has come to depart from the show.

“We’ve laughed together, we’ve cried together… but after seven years I feel like it’s time, you know?”

The Daily Show host shares a special message with his viewers

In a recent episode of the show, Trevor Noah expressed his gratitude to the audience who has made it possible for the show to continue for as long as it has.

“I want to say thank you… because man, I never dreamed I would be here. I couldn’t have done it without you and I wouldn’t have wanted to without you. You’ve made this one of the best experiences of my life.”