Alternatives have to be considered to address the kidnappings in our are. We don't want this to be an international embarrassment. 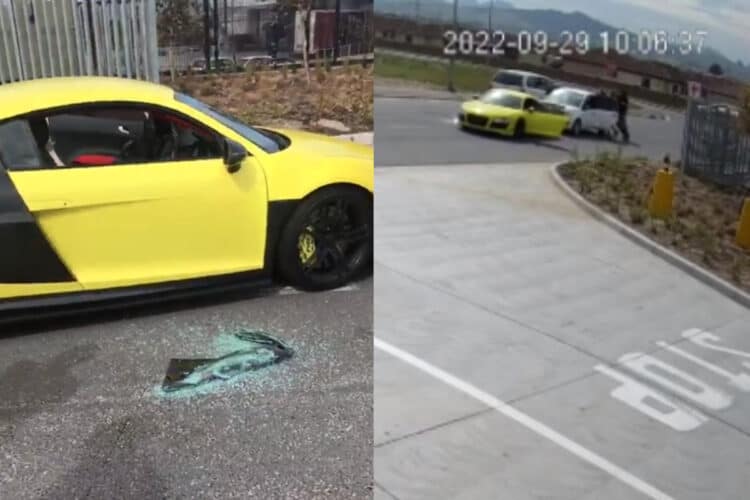 Woman kidnapped from her Audi R8 in broad daylight in Cape Town. Image from CCTV shared on Twitter.

Police in Cape Town have opened a case of kidnapping after a woman was snatched in broad daylight after being ambushed by unknown assailants on Thursday.

Video footage of the 35-year-old woman being snatched in front of Nioro Plastics on Ipswitch Road in Blue Downs has gone viral on social media platforms.

In the vide on footage, the yellow Audi R8 can be seen taking the turn down the main road and with in an instant a white Toyota Avanza stops in front of her. Unknown assailants jumped from the car and approached her.

Five seconds later a white Ford Fiesta stopped behind her preventing her from moving back. The men in the car also jumped out of the car and the woman was snatched from the driver’s side of the vehicle and she was dragged to the Ford Fiesta which closed her in.

The car which the 35-year-old woman was driving was not stolen, and in the video it is alleged that she is the wife of the owner of the plastics company.

Video of the kidnapping in Cape Town.

Reagen Allen, the Western Cape MEC of police oversight and community safety, said this was yet another reason why we should all be deeply concerned about this trend that seemingly has no end it sight.

“At this stage the circumstances surrounding the incident are still unclear. Later on Thursday, crime scene experts were still on the scene combing the area for clues. Over the coming days, I’ll be engaging the Provincial Police Commissioner about kidnapping and various other matters.

“Alternatives have to be considered to immediately address the kidnappings that are occurring in our areas. We do not want this to become an international embarrassment.

“This could also have a major impact on tourists visiting our shores or businesses investing in the province, which in turn negatively affects our economy and by extension job creation,” Allen said.

It is alleged that the woman who was kidnapped is from Ukraine.