Michelle "Mphowabadimo" Mvundla is celebrating after being crowned as the first woman to win Big Brother's grant prize - R2 million. 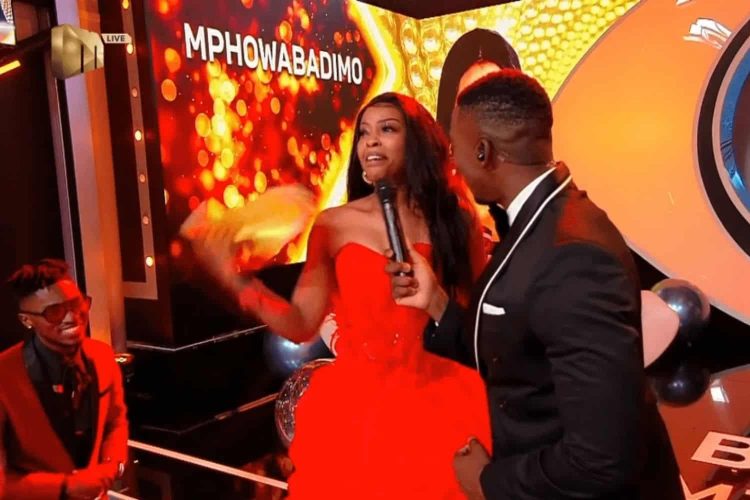 After 13 weeks of participating in Big Brother Mzansi, Michelle “Mphowabadimo” Mvundla was officially crowned champion of this season.

The announcement was made on Sunday night when Mvundla, who was the only woman in the top five, became the first female to win the grand prize of R2 million.

Not only did Mvundla become the first woman to win Big Brother Mzansi, but she also became the first Sangoma to win. And this is one of the main reasons why viewers resonated with her.

The fact that she represented a community of spiritual healers really made her stand out to the viewers and clearly paid off.

After the show’s long-awaited return in January, it soon became one of Mzansi’s most popular shows. And a big reason for this is due to the variety and controversy the participants this season had to offer – contestants who weren’t afraid to stay true to themselves.

And Mvundla wasn’t the only one who didn’t shy away from her “controversial” side.

Terry Treasure confessed on the show that she was an adult content creator and even has an OnlyFans account. But instead of being shamed for it, she embraced it. She took the time in the house to educate her housemates and reveal the pros and cons of having the account.

And Sis Tamara used the Big Brother platform to represent the LGBTIQ community. And with that, viewers were able to appreciate her free spirit and vulnerability.

[WATCH]: Smiling Man Waves While Speeding Along the N1 in a Trolley

TAKE A LOOK at the 2022 Grammy winners