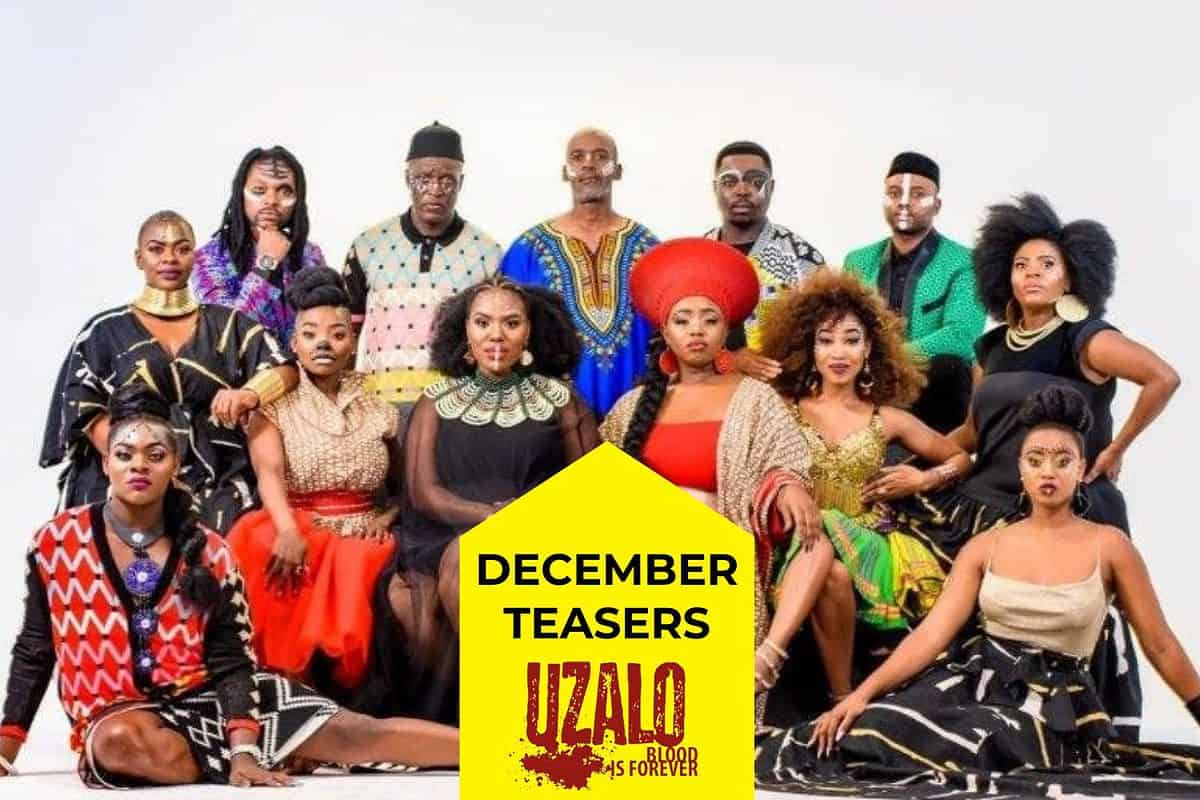 Coming up on Uzalo this December 2022:

Lilly wants Biyela to distract Nyawo while she interrogates the perpetrator to try and absolve Mondli.

Lilly and Biyela go all out to help Mondli while James discovers a shocking truth about the decision he made. Nosipho’s suspicions about Nkazimulo’s shenanigans are appeased by Nonka. MaMlambo and Mrs Ngema are not happy with the treatment at KwaMashu Police Station.

Colonel Mabaso has a difficult task for Nyawo. Nosipho’s suspicions are confirmed and she’s shocked. Hlelo might be forced to cancel the most exciting part of the Talent Competition.

Lilly vows to do everything she can to help Mondli. Nkazimulo rocks the boat with questions about Muzi’s real father. Colonel Mabaso promises the perpetrator a maximum of three months in prison – then he will be released.

Colonel Mabaso gives Nyawo an impossible task. Biyela and Lilly fear the worst and the talent show gets off to a great start!

Nyawo stamps his authority and shows the police force who the sheriff in town is. The talent show acts pull out all the stops, Moghelingz gets the shock of her life and a pair of fumbling magicians attempt a deadly act.

The talent show festivities continue as more hopefuls wow the judges in the hopes of walking away with the R100,000 prize.

The mystery surprise boxer is revealed. Mondli and Nyawo have a rendezvous with Commissioner Biyela.

Mondli tightens his ship at the police station, unaware of the looming tragedy. Nosipho tries to alert Pastor Gwala to Nkazimulo’s secret, but fails. The overall winner of the talent show is announced.

Mondli believes that Mthambisi is still keeping an eye on him, probably waiting to strike again. Nkunzi is happy with how the event turned out, he has a surprise for Hlelo. Mrs Madlala is determined to celebrate this December with a new man by her side.

A man’s dreams are crushed when he realizes that his woman is still hung up on her lover. Nkazimulo tries to meet his ultimatum, with no success. Mkhonto gives Nosipho and Pastor Gwala some bad news.

Mthambisi realises that his problems are far bigger than what the police uncover. Nosipho is clearly not getting her dream wedding but a party with colleagues brings back some joy. Mrs Madlala realises she has stiff competition for Bongz’ affections.

The Magwazas begin planning Putin’s demise while Nomaswazi has a surprising proposal for Mondli. The walls are closing in on Nkazimulo and Mrs Madlala shoots her shot with Bongz.

Nkunzi shocks Gabisile with a question she wasn’t expecting during the Christmas feature photoshoot.

Gabisile finally decides which man’s arms she prefers to be wrapped in. Nosipho is in complete shock at Nkazimulo’s unplanned confession. Hlelo is not sure about leaving KwaNjomane anymore.

Pastor Gwala kicks his lying son out into the streets. Mr Mbatha sets up for his grandiose, gala lunch to unveil the new KFC church building.

MaMlambo enlightens Nkunzi that he has already lost Gabisile. Nosipho confesses to Gwala about Nkazimulo’s suicide attempt and threats. Gabisile is back from Cape Town and agrees to give Nkunzi some answers.

The truth about the affair comes out in the open. Nkazimulo’s disappearance causes tension between Nosipho and Pastor Gwala. Bongz finally gives in and takes Mrs Madlala out on a date.

A pained Nkunzi takes his eyes off the road and accidentally hits something, or someone. Pastor Gwala is riddled with guilt when he finds out what his son was going through. Nosipho is pained by the accusations thrown at her. Mbatha refuses to award a long servicing member of the church.

Nomaswazi refuses to give Mondli any more information. Nosipho has no one to share Muzi’s first kick with. Mzimba steals from Mbatha.

Nkunzi’s anger leads him to drastic measures. Nosipho goes against her belief to seek help. The looming NYE party is the talk of the town.

Follow the daily catch up for Uzalo this December 2022, right here!