Brendan Fraser will make a comeback to film with The Whale alongside Sadie Sink. Here’s why fans think he deserves an Oscar for the role. 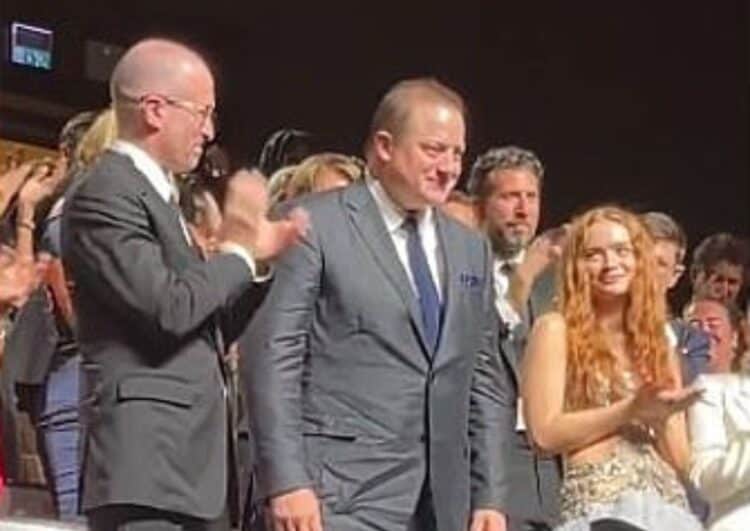 Brendan Fraser is pictured above at the Venice Film Festival during the standing ovation. Photo: Twitter/ Ramin Setoodeh

Brendan Fraser has officially made his comeback as an actor in his new film The Whale. Recently, the actor received a six-minute standing ovation after the screening of the film.

To date, Brendan Fraser has spent several years out of the spotlight. While dealing with his personal matters and depression. However, the actor has now taken up his first leading role since 2013.

Presently, Brendan Fraser is best known for his roles in The Mummy and George of the Jungle in which he was the leading man the films. After the actor took a break, his career slowly took a downfall.

However, fans are now anticipating the rise of Brendan Fraser. Since his new role received at least a six-minute standing ovation at the Venice Film Festival this past weekend.

In a clip posted to Twitter, Fraser was seen getting emotional after hearing the response of the crowd to the film. The clip shows the actor moving to move out of the theatre. However, the praise had him stuck in his tracks as the actor was visibly moved.

The actor was previously seen sitting down before being motioned by the film’s director to stand up. Following this, Brendan Fraser gave a bow to the crowd in acknowledgment of their praise.

Thus far, Brendan Fraser plays the role of a 600-pound English teacher who is trying to salvage his relationship with his daughter Ellie played by breakout star Sadie Sink.

Read More: Adele is officially one award away from reaching an EGOT status

Horoscopes and Lucky Numbers for 31 January 2023

The synopsis reads that the character is confined to a wheelchair after suffering the loss of his partner, hence the eating disorder.

So far, the actor has had to undergo a huge transformation to get into character. That is, getting into a prosthetic suit for the role.